I feel like somewhere in this page it should be mentioned how her voice is identical to Chris'. In one prank call video I couldn't tell it was her until she referred to Bob as her husband. Sallyfox 06:09, 25 December 2009 (CET)

GodJesus damn. Now I can easily see the effects of keeping around a 28 year old autistic manchild for so long. She looked a LOT better (and a lot less like Snorlax) in this image. Pfargtl9000 01:57, 12 April 2010 (UTC)

It may be simply that she, like anyone who would have to put up with somebody like chris, just gave up on life. The picture with Desi pretty much says it all.J0haely 07:05, 6 June 2010 (UTC)

I'd like to point out [here] is an obituary of Barb's father. Apparently, he died when she was 14. I think this info should be incorporated into the article somehow, but I'm not sure where to put it. ChaosAkita 18:20, 25 September 2011 (PDT)

Yeah. You know we need this in there. As well as the image and a space set aside for the reaction that she and Chris will inevitably give. Remember how he reacted when Megan in the original picture was mistaken as Crystal? Well this will induce 10 times the ammount of tard rage. From both of them. Now thats something i'm going to want to see. Who else here wants to see Barbara do a youtube rant? --Edward 20:43, 2 February 2010 (UTC)

I think you might be jumping the gun. Barbra's nowhere near as dumb or volatile as Chris, I doubt you'll see her on camera anytime soon.--Beat 22:02, 2 February 2010 (UTC)

I am not adding this yet because it's a pretty huge deal and I want to be 100% on it first. There's a user here-- I wish I could remember who-- whose userpage is full of various observations from people on /cwc/, #sonichu, PVCC etc. One of the posts from PVCC is the note that Chris sometimes sleeps (slept) with his mother. Not having sex. Obviously not. But apparently they'd watch movies together sitting on his bed, and then he'd sort of curl up next to her and fall asleep, with her asleep holding him. At first I couldn't believe it, but this is Chris. And if this is true it absolutely belongs on the page. It's pretty clear he has a strong Oedipal fixation on her (part of being stuck in a childlike state of development) and this makes sense. I'll go hunt for the quote. In the meantime, can anyone corroborate this? It seems almost a bridge too far even for our manchild. Sygerrik 10:17, 25 August 2010 (PDT)

BAM found it. Here we go: "This is something I just learned from Ivy, and this corresponds with what a field agent has confirmed about Chris has seen with Chris getting 'touchy' around Snorlax when Bob isn't looking. It's - Chris likes to sleep with his mother. According to Ivy, what Snorlax will do is come into Chris's room, the two will watch movies and lay down on the bed as Chris holds her, then they both fall asleep. In his bed.They use to do it downstairs on the couch but Bob started bitching about it, telling Chris to grow up and such. Yes, this is very shocking and hard to believe. But considering the prevailing opinion is that Chris wants a mommy he can fuck, this adds a new level to this analysis. [. . .] I mean, Snorlax and Bob don't even sleep in the same room anymore, they've been married for some time and there's usually a point where a marriage becomes more of a friendship, and both Chris and Barb are both human in that they need some intimate contact and affection. But the thing is, while this is normal of small children to want to cuddle with their mothers, it's not fucking normal for 27 year olds to do this. And I think there's actually a period in childhood development (normal one, anyway) where a child learns that they can't have mommy all to themselves but they have to share her with daddy. Looks like Chris never really reached that realization. Freud would have a fucking field day with Chris. Seriously though, I imagine one day we will get Chris confirming this, as he makes a video saying 'Yes, I do sleep with my mother, but what child does not sleep their mothers at some point in their lives?'"

You are now aware 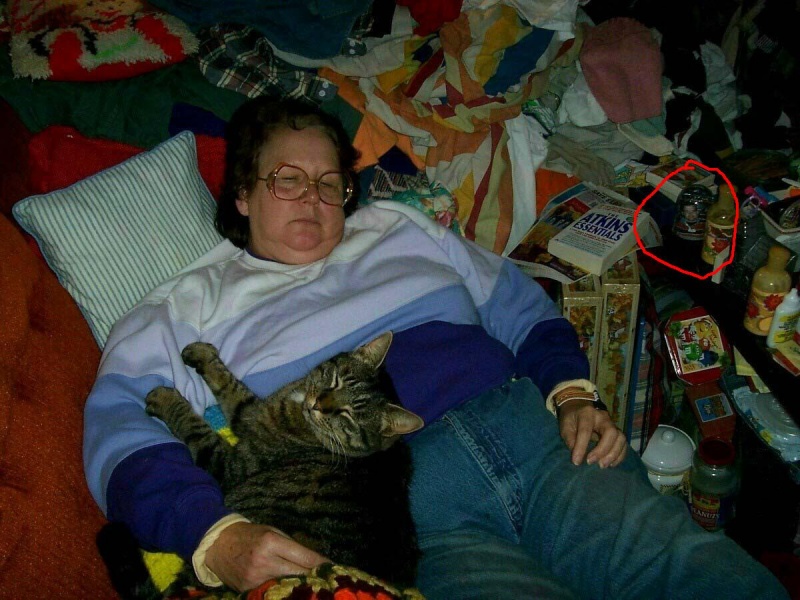 Barb: The root of the problem?

I was reading over the Ivy Q&A thing, and apparently the first time Ivy called the Chandlers, Barb was at the phone asking her personal questions. I was thinking, maybe it's not Chris with the horribly high standards, but Barbara? I could totally see Barb enforcing high standards on Chris, not allowing him to date men or women of races other than his own, maybe she even told Chris to put down the single mom on Facebook. This is just a theory, but might anyone know whether or not there's any truth to it? -- IcyHotWings --

Do we have evidence that Barb and/or Bob had any desire to divorce/separate? The article section about her marriage to Bob suggests that his parents wanted to divorce but chose not to for Chris's sake. Source? Yes I get that we get the impression that Bob and Barb liked to spend time in separate rooms of their house, but so do many couples in "healthy" marriages, particularly if one, the other or both are considered to be elderly. --Anonymax 23:57, 20 September 2011 (PDT)

As far as anyone can tell they were just fossils. Neither would have a sex drive and they'd basically just be living with each other. If you were either one wouldn't you get the shits with the mannerisms of the other after almost 30 years raising Chris together? Supposedly they used to go out drinking but in their decaying state that wouldn't be an option, biologically or financially. If they divorced someone would give up pension/rent money and the house. If it was a marriage of convenience, fine. It would feel like stomping on Barb's grave to speculate on that kind of thing without evidence. Nullity 02:00, 21 September 2011 (PDT)

I ask specifically about whether they, or Barb herself, have ever said or directly implied that they would have separated/divorced if it were not for Chris - because currently the article implies this and lacks a source. --Anonymax 17:49, 21 September 2011 (PDT)

To answer your question: No, there is not any evidence that Barb or Bob said they wanted to divorce each other. Barb threatened to kill herself, but that was over Chris, not Bob. Hopes that helps --SargentPickles 19:53, 21 September 2011 (PDT)

Cole's father and the spaghetti incident

Wasn't there some e-mail or something where Chris talks about how Barb was escaping some psychotic murderer and she slept with a random stranger who saved her and that's Cole's father? Likewise, we say something about the spaghetti incident, where Barb stopped cooking because she made spaghetti one night and Chris and Bob didn't feel like eating spaghetti. I can't recall the source for either of these though.--Champthom (talk) 14:23, 7 May 2014 (UTC)