On 29 December 2014, Nash, the star of podcast channel Radio Dead Air and a member of the Channel Awesome (formerly known as That Guy With the Glasses) team, covered the 26 December 2014 incident along with his co-star Tara, as part of his weekly What the Fuck is Wrong With You? (WTFIWWY for short) segment, where the duo talk about instances of bizarre behavior that have been documented by major news sources and/or people on the Internet. Until this point Nash had shied away from the subject of Chris for much the same reason as fellow Channel Awesome producer Linkara, namely a desire to avoid bringing Chris any unnecessary attention, but decided that he had to cover this incident due to the large number of e-mails he received on the subject (at least 87 as of the podcast), and the incident being unusually insane even by Chris's standards.

During this segment, the two react to Chris's actions with the expected level of shock (especially Tara, who had never heard of Chris before that day), along with watching the video taken by monozettai. Tara also compares the situation around Sonic's blue arms (and Chris's subsequent reaction) to people flaming over the racial changes and Auto-Tuned musical numbers in the 2014 version of Annie.

The video was later posted to the Channel Awesome website under the title "The Passion of the Chris-Chan", and Nash's high-ranking status among the site's producers meant that for part of 3 January 2015 until the following afternoon, the site's top video was related to Chris.

Chris hasn't given his reaction to this video, which is rather surprising given his knee-jerk reaction to almost any media publishing, mocking, or trying to knock sense into him. It's likely the burnout from the GameStop incident, along with Chris and Barb being in the middle of moving out of their Rental House and back into the rebuilt 14 Branchland Court, simply made him overwhelmed and unable to respond. This was also the first time that this very wiki was mentioned in the media.

[This transcript begins 1:43 into the podcast; prior to this Chris is mentioned, but not by name, and with no specifics of the 26 December incident. Nash also notes that prior to this he never wanted to cover Chris]

Nash: Okay. This is a saga. This is not just an--an Internet story, this is a fucking...saga. Chris-Chan is an individual who...loves Sonic! Loves it.

Nash: The hedgehog. Loves fucking Sonic to an insane degree. And, uh, he--e also does a webcomic...I loosely use that word, about a totally original character that he created, called Sonichu, which is a combination of Sonic and Pikachu. That is all his.

Nash: Totally original. And if it were just this...it would be one thing. But over the course of the last few years, fuelled by 4chan and trolls of various assortments, he has gone on a strange, bizarre, si-sliding rollercoaster of utter...madness. There is a wiki devoted to this person. He does not author said wiki, it's done by other people, chronicling the madness. Now, the incident we're talking about today, the reason we're getting to it today, is that...he was arrested. I'd like to say "at long last," but apparently this is the second time, but no, today, he was arrested...well, not today, it was on the 26th. He was arrested, and the incident was caught on video. [pause] Now, the reason this happened, apparently, is there is a new Sonic game called Sonic Boom. Most of us who played--

Tara: They just got to that now?

Tara: How long's this been a character, and they just got to that pun now?

Nash: They'd--I...well, yeah. [shrugs] I guess. The game is called Sonic Boom. Now, most of us, we recognize this is a bad game for many reasons. The camera's awful, the characters never shut up, the gameplay is horrific, it's just a bad game. But no, this is not Chris-Chan's problem with Sonic Boom. Chris-Chan's problem with Sonic Boom...is that they changed Sonic's arm color from white...to blue. This has caused...a rage among--in his mind. Flames, flames, ons--that kind of...yeah. To the point where he went to his local GameStop--according to reports--attempted to deface the Sonic Boom display. Now, he's already been banned...from this GameStop...

Nash: Yes, exactly! He had been banned from the GameStop before, but then...[to his computer] come on, I mean--I have to show them the video. Then, ladies and gentlemen, we got video! This happened. And...a--a--a...let me see if I can give you the actual video link, Tara...or just quickly type in... go to Google, and google "Chris-Chan GameStop." It's slow as dogshit, I'm sorry, I--I put the link on there, but...here we go!

Tara: Because they changed the color of...?

[In the video, Chris blows a raspberry, yells "Don't call anybody!" and sprays pepper spray at a GameStop employee]

Nash: And there he goes! Hits the guy in the yellow shirt with pepper spray. [Tara is staring at her own computer screen in visible shock] I'll play that one again for you, as it's brief, but it happens. What you hear him say is "Don't call anybody!" is what he tells... that's his instructions. Anyway, here we go.

[The video is shown again] 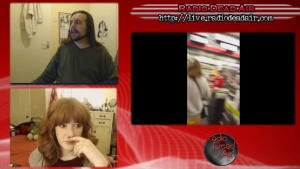 Nash: There we go, and...sprays the guy with pepper spray. [Tara silently gasps] And, that--that--that's what happened. And shortly after this, the police, who were, um, none too pleased about this... you see, while it may not--I don't understand, and, uh, other people ask me about this, it's not a big deal anymore because "Well, uh the cops'll hit you with the pepper spray and th--and the taser, so what's the big deal?" Well, even if you don't hurt somebody--and the guy at the GameStop was not really hurt--the act of spraying someone with pepper spray, is an--that's considered an assault.

Tara: How did that progress to macing an employee in the face? Clearly, like, that employee probably didn't have anything to do with the changing of Sonic's arms.

Nash: No. But he has been banned from this GameStop before this. For this kind of shit. They progressively told him, "Stop coming here. Don't do this kind of thing." And, he...now, he's out on bail right now. God knows how much that's costing. He was arrested, he was held until today, from, uh, over the weekend, he's out on bail, and his version of accounts...he likens that GameStop employee you just saw, the one who was pretty much just standing there...

Nash: To leaping out at him in a darkened alley, like a rapist.

[Tara looks from side to side, clearly not sure how to react. There is a long pause.]

Tara: Does he know that he's not a police officer? [Nash shrugs; Tara laughs nervously] You can't just...you don't get to say, "I feared for my life."

Tara: Unless you're a cop who kills somebody.

Nash: It...it's just THIS...really, this is the hill you wanna die on?

Tara: I...I honestly don't, like...I'm not a video game person, my nephew got a bunch of new video games for Christmas that he keeps trying to talk me into playing. He got me to play Minecraft, for...I think for, like, ten minutes before I drowned in lava?

Tara: Today we played some fishing game, I didn't catch any fish. He keeps trying to get me to play Disney Infinity, and I'm like, I can't dishonor Captain America that way, because he has the full Avengers set. Um, so, um, I'm not a video game person. I played Rock Band sometimes--

Nash: Alright, alright. What if Captain America, in the video game, was red? What would your reaction be?

Nash: There you go. Yeah, yeah. Would you, in fact, pick up a chemical weapon and go to your nearest game store?

Nash: Probably not. No. That's not what you do in this situation.

Tara: That's not what we call a proportionate response. Nor is it an effective one. Like, I've worked retail for a long time, and I'm here to tell you, the people working in the store? Fuck all to do with the decisions that are pissing you off. We're not the people who decide on the price of the item, when the store closes, how many we get in stock, what color Sonic the Hedgehog's arms are...

Tara: And if we were the people making those decisions, we wouldn't be working on Christmas Eve, in a store. So, coming after the retail people? Getting you nowhere.

Tara: We are the Morlocks, living underground on-- [Audio briefly cuts out]

Nash: When I was younger, I would get so much into a fucking tizzy about shit. Inconsequential bullshit, pop culture, it would just piss me off to great lengths about, "That shouldn't be like that, that's stupid--"

Tara: Well, when you think that people are pissed off that Annie's black...

Tara: She's supposed to be a redhead, and I'm like, okay, I'm about the biggest redhead elitist you're likely to meet. And they were like "Annie's going to be black," and I was like, "Oh. Alright."

Nash: I was, apparently, as far as Annie goes, I was told that the worst offense was that Cameron Diaz should apologize to Carol Burnett.

Tara: I've heard she's the weakest link, yeah. I've heard--I heard they added a couple of songs that don't really fit with the whole thing. Those are the two biggest actual problems that I heard. But people are really pissed off that Annie's black, and I'm like....."Why?"

Tara: Like, it's not actually a plot point in the movie that she's a redhead. It's not. Like, she happens to be, but it doesn't affect anything. Like, there's no reason why Annie can't be black. Or why Daddy Warbucks--or, I think his name is Will Stacks now--can't be black. There's no reason why Annie can't be white and Will Stacks... it doesn't matter!

Nash: And I don't recall anyone going down to their local Carmike Cinema and macing the fucking guy with the popcorn.

Nash: They're not paid enough to deal with this shit!

Tara: Give it a week or two, the movie just opened.

Nash: It's, well, i's been out on the Internet for a while. Thank you, Sony hackers. We've got more tonight, and oh, god...and--you know what, here's the thing. While Chris-Chan is such a popular Internet topic--

Tara: Is that his real name, like, he changed it because of 4chan or something?

Tara: Okay. 'Cuz, you said "Chris-Chan," and I was like, is that the new 4chan, 8chan? Are they just naming them now? They ran out of numbers?

Nash: I'm gonna tell you, our last story tonight, when we get to it, will kind of make this one seem inconsequential. But you wanted me to report on it, Internet, and I did! So...there, you go.