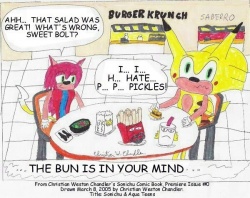 The Aqua Teens in Sonichu #0. Notice Master Shake and Frylock on the table, and the caption "The bun is in your mind" was Meatwad's catchphrase from the Space Ghost: Coast to Coast episode that featured ATHF. Also visible is "Ce-Lad", a salad character created by Chris, according to Jackie Chat 2. 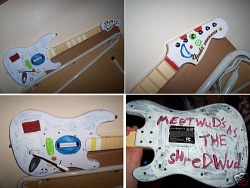 Chris's "Shredwud" gitar, which he later sold to a troll on eBay.

Aqua Teen Hunger Force is an animated series on Adult Swim that later gained a cult following. It features low-budget bad animation, so it comes as no surprise to see that Chris likes it, even if he probably doesn't get many of the jokes.

Chris wasn't always a fan of the series. In a 2005 post on the Cartoon Network forums, he said that he enjoyed all of Adult Swim's shows "except ATHF", although he didn't explain why. He later started to like it, including the bizarre Old Time Rock and Roll on Shredwud music video. However, he seems to have gone off it around 2010 according to Vivian Gee E-Mails, comparing its decline to Alec's "Blood and Gore".