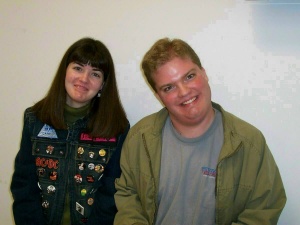 John's Custom Gundam: Sisterly Rescue is another one of Chris's shitty game ideas. This time, instead of focusing on Sonichu or himself, Chris puts Megan Schroeder's brother in the spotlight.

John is Megan's older brother who Chris originally thought was her boyfriend. Not much is known about John, but a few details can be gleaned from Chris's email correspondence with Megan. He took a Mechanics course at a school in Kentucky in summer 2007, having apparently passed up the opportunity of a two-year degree at a school in Florida. Megan went along with him to Kentucky for the summer, to Chris's disappointment. In April 2008 John either was fired from or quit his job, as Chris wishes him "the best of luck and the Lord's blessing on him finding a new, better job". John is overweight, shares similar interests with his sister and seemingly has an epicanthic fold, making him appear to be retarded. Mimms said that "Megan's brother isnt autistic, but he is kinda dumb."[1] His current whereabouts are unknown.

In an obvious bid for some Sailor Soldier China, Chris thought he'd ingratiate himself with Megan by casting her brother in one of his crappy games. This one manages to work in elements from his Sonichu comic series and the mecha anime franchise Mobile Suit Gundam. Not much is known about the game, like the rest of Chris's ideas, beyond the mock cover. Interestingly, this piece (according to the "copyright" data) was produced sometime in 2008, which suggests that it pre-dates the drama over Megan's discovery of ShecameforCWC.jpg but was created long after Megan told Chris that he was creeping her out by casting her in his comics.

The most notable aspect of this game is that someone other than Chris or Sonichu is the protagonist. Instead, it's John Schroeder, Megan's brother. The picture states that John is to pilot a custom-built Gundam (made from Lego or Pixelblocks, perhaps) to rescue Megan from Mary Lee Walsh and her "overgrown army", the Jerkops, Dr. Eggman, and some random units from the original anime series antagonists, the Principality of Zeon (most likely Zaku spam). Of course, you can unlock Chris as a playable character. After all, who would Chris be to deny us the chance to "earn the right" to play as the CWC?

The title of the game is odd, as it implies the rescue itself is sister-like. Despite this, the back cover states it's John who's rescuing his sister; nothing indicates that John or his rescue mission would be of a sisterly nature. Or, one could just assume these kinds of weird linguistic slip-ups are to be expected from an isolated autistic manchild.

The reverse side of the box makes reference to several "features":

It was also set to feature Chris and Megan's voices.

It is more than likely that Chris copied most of this off from the cover to the PS2 game Mobile Suit Gundam: Journey to Jaburo, which is part of his game collection. In fact, John's "custom" Gundam happens to have a very similar color scheme to the Gundam featured on the cover of that video game.

Although the game's cover indicates that it is rated T for Teen, the back cover states that it does indeed contain HONEST content, albeit not enough to earn it the same rating as Christian Weston Chandler's Adult Chronicles.

The item number on the box is 8675309, referencing the song by Tommy Tutone and showing once again that Chris can't go for five seconds without ripping something off.