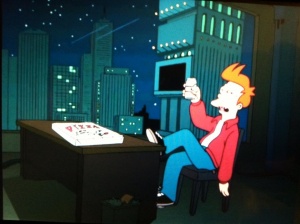 Futurama is an animated sci-fi satire created by Matt Groening that originally aired on Fox beginning in 1999. It originally was mediocrely reviewed by critics, who said the show was essentially The Simpsons but in space, so Fox dumped the show in 2003, and the next year handed over rerun rights to Adult Swim. Much like Family Guy, the show gained popularity through said reruns, and critical reception grew greatly, where it is now acclaimed as one of the best adult animation has to offer. Things looked like they were going to get ugly in 2007, where Adult Swim's rights to the show expired, but despite that, Fox decided to produce four direct-to-video movies from 2008 to 2009, and handed over syndication rights to Comedy Central, who aired all of the original episodes and the movies (as 16 individual episodes), and eventually decided to produce 4 half-seasons.

Futurama was one of Chris's favorite shows from the Adult Swim lineup, so he occasionally peppered his comic with material from it. While Futurama can be enjoyed on multiple levels, Chris probably only watched it for the random-access humor and so he'd mass debate to the fanservicey characters.

Stuff Chris stole from this show 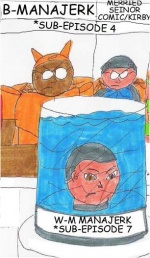