Difference between revisions of "TrollBusters"

Not coming to a TV near you.

The TrollBusters was a stupid idea Chris developed in late 2010: an organization dedicated to eliminating those who troll him, recruited from Sonichu fans. The whole thing was a clear ripoff of Ghostbusters. 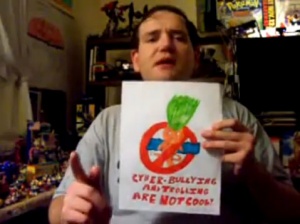 Cyber-Bullying and Trolling are NOT Cool!

Chris hoped to found a worldwide anti-trolling movement, "to put a stop to bullying and cyber-bullying."[2] He launched it on 26 September 2010[3] and in an announcement for the Presidency said that, if elected, he would create local TrollBuster stations.[4]

Chris planned a pilot issue for a TrollBusters comic. Jackie suggested this as a plot: "the victim was called to go on a first date with a girl at burger king. but when he got there, turned out it was a plot. it was trolls who wanted to steal his pendant, which was a family heirloom handed down for generations and so the trollbusters have to go hunt down the thieves and get it back and at the end they find out that the trolls they beat were just flunkies of more powerful trolls that they would face in the future. i figure its kind of something you could relate to because trolls tried to get your medallion, so your feelings could go into it easier." The trolls are from "Trollvania."[5]

The TrollBusters have use of a "TrollBuster Truck (a cleaned and souped-up Garbage Truck)"[7], a "Sponsored Private Plane,"[8] and a TrollBusters Car.[9]

Chris opened by suggesting that: