In Kacey's recollection of her date with Chris, she mentioned how he would sweat profusely just by walking. Where in the article should I add that? --BreadGod 21:17, 14 June 2010 (UTC)

The article currently says: "Chris has probably never had any regular exercise since leaving high school, and the lack of physical activity has contributed to his already ballooning shape. It has also left his skin a frightening white that starkly contrasts to the dark background of his room while making videos." Now, I'm not a medical professional or anything, but I'm pretty sure exercise level doesn't have much to do with skin color. The second sentence should probably be moved or at least clarified.

So when WAS the last time Chris took a shower?

Seriously. What was the exact date of Chris's last shower? Considering how much he's divulged about his life it shouldn't be hard to aquire this information. Dann Woolf 13:30, 14 January 2010 (UTC)

Is he in danger of developing diabetes?

Its just speculation on my part but with a 60 ounces of coke a day habit and whatever other high sugar foods he is eating combined with his obesity as well as the possible hypertension make me wonder if he is at risk. Shawths

That's another thing that bothers me--why was he on Paxil? I hear that it treats two things--depression and excessive urination. Either way I want to know what prompted it.--MoarLurk 21:34, 14 June 2010 (UTC)

It is mainly prescribed to treat depression, but is also occasionally prescribed to individuals who complain of extreme stress. It is possible that the lumberjack and snorlax got Chris a prescription thinking it would mellow him out, or it may be that Chris has been very depressed and the paxil was specifically prescribed to him for his depression. Considering his goals in life, and his chances of achieving them, it is quite likely (even with Chris's limited mental foresight) that he has realized that his goals are almost certainly unachievable, and thus he is depressed. SargentPickles 18:25, 14 June 2010 (EST)

It is interesting to see when Chris started taking paxil. If we refer ourselves to the Autism paper (Circa 2004), it tells us that the ManChild was on that medication for the last 4 years. This bring us to the end of his High-School years and his enrolment at the PVCC. There's a possibility that it was suggested to Chris's parents to put him on meds to help him with the transition from one setting to another. After all, autistics love patterns and the loss of those patterns can cause stress and bouts of 'Tard-Rage. Griffintown 02:21, 15 June 2010 (UTC)

I think it should be mentioned that the inability to recognize faces is a very common trait of Autism. The fact that Chris cannot recognize faces confirmed (to me) that he definitely has a form of autism before those psychiatric evaluations were released.

Also, a lack of smell-sensory is another symptom of autism. This is definitely far from the only reason that Chris never showers, and not all Autistic people lack a sense of smell, but still I thought I should mention it.(Wiki newfag here; I hope this works.) --Windyshoot 09:02, 17 March 2010 (UTC)

A lack of facial recognition is fairly common, or facial confusion. I believe it tends to be more of an issue for quick introductions, though, not anyone who there's been an extended interaction with. The second part is, however, just my own experience with the 'sperg and should NOT be taken as a universal.Zekedms 19:42, 23 February 2011 (PST)

In response to to how much weight chris gained during his apearence in the pimp my ride video, someone in the talk section asked for a comparison between chris's breast and those of a big chested woman. after combining the image below i noticed that chris has gained so much weight that his man-boobs have become massive. what i'm trying to ask is if the image could be included in the chris and obesity section. User:MoarLurk 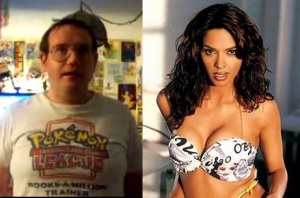 I suspect that Chris has a hormonal imbalance. Even with his corpulent physique, his breasts are disproportionately large, and his nipples look like pepperonis. --BreadGod 22:07, 14 June 2010 (UTC)

i've beggining to suspect that chris suffers from hormonal imbalance, it would explain his high pitched voice and the overgrown mantits and acne at that age. Poor hygiene can explian the acne a bit. Obesity can explain the mantits, but to Chris's level, it has to be the hormones, I think he has an exess of strogen in his system.--Basgon 04:46, 10 July 2010 (UTC)

No. He grows facial hair easily, and the associated hypogonadism means lower decreased testicular hormone/endocrine function, not smaller genitals. His obesity and autism explain pretty much all of his symptoms. Chris's voice isn't especially high, except when he freaks out. Eamoo 12:44, 20 February 2011 (PST)

No, it isn’t Klinefelter's. It’s already been addressed in detail in one of the speculation topics, so to spare a TLDR I’ll be brief. Not only is there no evidence pointing to it, but his phenotype is incompatible with the condition. His integumentary problems: his acne & bad complexion, androgenic baldness, fat distribution pattern(fat in the gut first is a testosterone induced thing), shows that his body has no shortage of testosterone. Since he has that much fat, some of it is bound to go and cause manboobs, that’s pretty much like any guy will get when they cross over to obesity.(The fat means more horomones & some of the exess T will be converted to estrogen, but obviously not enough to overpower the testosterone turned DHT's effect on his skin& hair) Also since the latest molecular research into autism shows that estrogen acts as a promoter for several genes that are linked to protecting against autism while testosterone methilates them, it’s unlikely Chris has ever been estrogen dominant, and it’s likely he was exposed to too much testosterone in utero. It’s not Klinefelter's.-Kei 21:25, 21 February 2011 (PST)

This article mentioned an non-sourced comment from Wes Iseli about Chris's funk during his PVCC days. I know it's not an official statement, but does any one know where or who that came from? ---ConCat 17:17, 28 August 2010 (PDT)

Should we add the new information about his weight we learned from this new video? We should also probably add something about why he must weigh 216 despite having the body we all see. --BreadGod 16:31, 26 October 2010 (PDT)

Could it be that Chris also suffers from the conditition known as Klinefelter Syndrome? He has many of the symptoms:

I think it's pretty likely Chris has this discease. Maybe on top of other things, but it would explain a lot of his physical characteristiscs and behaviour I'd say. Charles 02:39, 29 November 2011 (PST)

The link to the first source seems to be broken, Chris' email responses in the linked "mailbag" are definitely not from Chris.--Lylelash 18:41, 23 April 2012 (PDT)

When was the last time Chris went to a doctor?

Seriously. He's obese,rarely showers, most likely doesn't brush his teeth, and lives in a house infested with bugs that left Bob covered in so many bites he had to be hospitalized. The aforementioned might happen to live off blood, and could pass on diseases to hosts. It's highly unlikely that he has been vaccinated recently as he would rather stay home and play video games (considering Chris rarely leaves his house, however, this might not be too big of a problem), possible vitamin D deficiency from going outside, and unless Chris used protection, he may have an STD. How can any doctor allow this?--Germanicus 19:22, 11 May 2012 (PDT)

While 1) this isn't a forum... 2) Chris has not been giving out information about his life like he used to (or that we know of)... so as far as we KNOW, it was when he was "with" Kacey. He talked about going to the doctor quite a bit while emailing/phoning Kasey. The first time when he had to take some stress meds and his doctor took him off, and then he found out he was 206lbs, the other when he talked about his penis size and how to enhance it.... and another time when he said he had an appointment. I think he probably does get check-ups once in a while..but all he'd have to do is brush his teeth and shower before going and that'd be good enough to disguise a lot of what's going on. He's the only one that lives on his floor, and he rarely leaves his room, any bugs that may have lived with Bob or Barb probably don't hitch a ride with him to produce the number bites Bob had.--4Macie 19:36, 11 May 2012 (PDT)

Should it be noted of the poor condition his shower is in? Even in the tiny glance of the reference picture? I wouldn't want to shower in a place that likely had mold, though if it were me, I wouldn't have let it get to that point in the first place! --SerenityMoonstone 23:25, 15 May 2012 (EDT)

I've been wondering why Chris acts so damn hostile towards therapists. Is it due to his ego, or maybe something else? Steampunk Mage (talk) 20:14, 13 September 2017 (UTC)

I have a feeling that Chris might be suffering from Schizophrenia, a chronic and severe mental disorder that affects how a person thinks, feels, and behaves, and Chris has been exhibiting telltale signs of it long before, such as his declining hygiene, visual hallucinations, withdrawal from friends, family and society, loss of contact with reality, lack of focus and motivation, and disorganized sleep schedule. Some particular risk factors include being born to older parents (and an older father in particular); as well as having a family history of similar mental illnesses.

Chris's description of the "heart attack" and page 11 from Sonichu 14 shows that he had really just had heartburn or something. This isn't the first time Chris has exaggerated his health problems - he also claimed to have torn ligaments in his knee once but was walking around fine. So I think we should remove the heart attack statement from Cardio Health and make a new section on Exaggerated health problems. Are there any other examples of him doing this? Hurtful Truth Level (talk) 23:28, 30 June 2019 (UTC)

I remember reading somebody on the Farms mention a time that Chris claimed to have torn a ligament, yet posted a video of himself walking down the street a few days later. This would have been about August 2017, if memory serves. I have no primary source, however, and searching ligament here for a video or social media transcript gives nothing. A section about Chris' general knowledge of health, which could include exaggerated claims of illness as well as self-medicating (e.g. the belly fat videos, smearing his mum's oestrogen cream over himself), his beliefs about the human body and even his obliviousness about his parents' conditions over the years, might be a better idea. ChanOfTartary (talk) 00:38, 1 July 2019 (UTC)

Added the source for the ligament info to the Misc texts page. What were the belly fat videos? Hurtful Truth Level (talk) 01:04, 1 July 2019 (UTC)