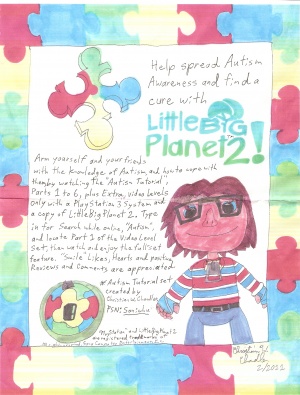 The Autism Tutorial is a machinima series of seven levels made by Chris in LittleBigPlanet 2 on 13 February 2011. The levels, just as most of Chris's other LittleBigPlanet projects, consist entirely of non-interactive cutscenes.

In theory, the videos are about Autism, along with an epilogue discussing Asperger syndrome, which is part of the Autism spectrum. However, contrary to what the name suggests, and in line with any project Chris takes on, he does not keep on topic but quickly moves on to bitter rambling about the main struggles of his life, such as his high school graduation, being banned from places, and losing his gal pals. In classic Chris fashion, he uses most of the tutorial to blame everybody else for these problems, ranging from Bob for seeding Barb at a late age, to Mary Lee Walsh and Michael Snyder for banning him for his behavior, and random strangers on the street for not acknowledging him. He also refuses to accept that Asperger's is connected to Autism in any way.

The majority of the presentation pertains to Chris's abject loneliness, as "quitting the Internet" clearly hasn't led to the varied social life he envisioned. Chris also complains about the entire Ian Brandon Anderson incident during these videos, but ironically enough, Chris's Sackboy avatar more closely resembles Liquid Chris than it does himself.

These levels were uploaded shortly before Chris announced himself to be a "Tomgirl", on 30 March. The sackboy version of himself in these episodes wears the clothing of pre-Tomgirl Chris, including his "classic" sweater. This suggests that the tomgirl transition was rather sudden. He told Jackie on 26 March that he had "gone through an emotional 180, more or less, within the past month".[1] Chris's avatar does, however, have the long reddish-blonde hair that would later become a staple of his Tomgirl look (which, when combined with his Pedo-Glasses, makes his avatar look oddly like Chuckie from Rugrats), even though Chris didn't experiment with this hair color in real life until around July 2011.