Hyperdimension Neptunia is a series of role-playing video games created and developed by Idea Factory. Games within the series takes place in the world of Gamindustri (a pun on "gaming industry"), which is divided into four regions/nations, with each representing a specific video game console. Chris became a fan in late 2017, being introduced to it by Idea Guy and having watched the anime based on it.[1] 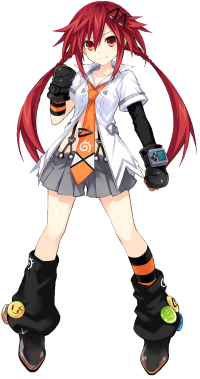 Battery-Charge Heart; CPU of CWCville, Virginia, aka Tank Destroyer, was created by Chris in response to pressure from Idea Guy describing the nightmarish state of CWCville. She made her debut on 11 December via a Facebook post[9]. Fans were quick to point out how she is scantly clad and how it would be tough to fight in the outfit (notice how short the skirt is) - even a Twitter white knight talked about being disappointed in Chris for making the "strong female" have this appearance. This originally uploaded image of Battery-Charge Heart appears to include the bottom corner of the holographic 'Sabrina' Pokémon trainer card from the 'Gym Challenge' set, though the significance of this inclusion is unlikely to extend beyond being a visual symptom of Chris' compulsive hoarding of random crap.

She is heavily based on Wonder Woman. Her name is based on Battery-Charge Blue, a color by Crayola, which is Chris favorite[10] Considering that no original video game consoles are produced in CWCville, it is unclear which Battery-Charge Heart is supposed to represent. Could this be a new form of Chris in the comics..? 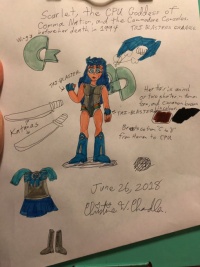