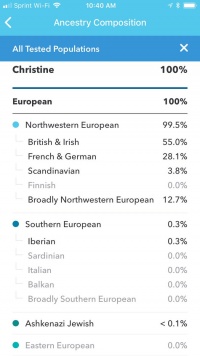 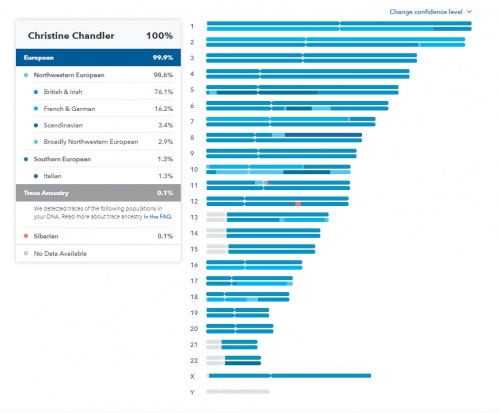 CWC Ancestry is a video of Chris explaining the results of a DNA test from 23andme.com, which the Idea Guys had him take.[1] He proudly declares and talks about his Jewish and African ancestry, despite the fact that he's not even 0.1% of either. The DNA test also reveals that he is not Native American as he previously thought he was.

Sometime after the video was uploaded in 2018, Chris's 23andme results were updated to be more accurate. Chris has in fact no Iberian or Jewish ancestry, but he is 1.3% Italian and 0.1% Siberian (the closest thing in his ancestry to Cherokee). He is also 76.1% British/Irish rather than 55.0%.

Brought to you by 23&me; get Your Ancestry History and Report.

Hello, everybody, this is Christine Chandler, coming to you live from home once again, and today we are... talking about ancestry, sponsored by... 23andMe, 23andMe.com, that's where I pay my money, that's where I send my DNA, that's where I got my salt - my results earlier today. And, apparently, one - I'm 100%... European. But also, in my... paternal hay - haplogroup, which comes from my father, apparently, there was some black in him, so... I'm black too. Hmm!

So, [dramatic glasses removal] on the first - on the high note of that, I'm definitely taking the first... preposition to address, I personally wish to extend my apologies, my most sincere apologies to every single Jewish individual in this world, and everywhere else... for, uh, saying all the hurtful things I have said in the past, over the years. And, also, I extend the same apologies to the black people. I never really had any offense against black people, mind you. I'm a fan of Michael Jackson, I'm a fan of Louie Armstrong, I was a fan of Redd Foxx, I was a fan of... I was a fan of the guy who played... George Sanford... George... Jefferson! [raspberry] I like black people, alright?

And I didn't really have a thing against Jewish, except, uh, for, pff, uh, that one time where I said that thing hastily to... Michael Snyder, if you're listening to this, I apologize to you as well for that hurtful insult, so. And I'd like to go ahead and state and emphasize right now that... I recognize, mysel- I appreciate my Jewish heritage, and... I respect all Jewish people from now on and everywhere else, and I encourage to do the sa- everybody else to do the same, but... I reserve my right to not celebrate Jewish holidays. I may, if I am invited, then I'll celebrate with all of you, but that's not gonna be my typical thing. So with that, uh, everybody, be appreciative, be open, be kind, be supportive. I'm still a trans woman. Okay? Alright.

And I put down links on my Twitter, and on Facebook, to... among which, my ancestry composition, my halogroups of my father and my mother, so... I'll copy those in the... link down below this - down below this video. Thank you all so much, and have a... good, safe day.