This page lists the video requests that Chris was paid to do in April 2018.

This video was requested by Kiwi Farms user SpaceQuakes, infamous for having an obsessive fixation over the game. In the fall of 2017, SpaceQuakes had tweeted about the game to Chris 53 times in the span of two weeks[1]. Chris later complained about not receiving any money for the video[2].

Chris begins the video normally, puts on his sad face to beg, then shifts to cheerful for the Shin Megami plug.

Hey everybody, this is Christine Chandler coming to you live from home once again with a bit of a advertising update, a bit of an advertisement. Buy Cole Smithey's things right now... because we need the money here at home, okay? And this ad is brought to you by Shin Megami Tensei: Nocturne! Buy now! Enjoy it! It has all the DLC and stuff! Yaaaaayyyy! Buy Shin Megami Tensei: Nocturneeeee! Have a good day.

A few seconds of Barb dancing

Barb does the twist. In the background, you can see Clover and Snoopy's dried shit on a newspaper.

Chris wishes a customer's friend a happy birthday followed by parroting lines said customer wrote for him to say.

'ello eerrybody, Christine Chandler coming to you live from home once again and today we're doing a bit of a BIRTHDAY dedication. Eughh.. so I'm here to thank Jack K. of Wisconsin once again for his kindness, and to also wish a happy birthday to his friend - Frank. Happy twenty-seventh Frank! Yaahy! TwENEY SEVEN bELLS black shineee (unintelligible). Aquitine cheese... (blows raspberry). And also Joe! You are an amazingly and wonderful and awesome friend to Jack, you should appreciate him for all he does for you. And Tyvek, stop eating soy! It is bad for you, you don't need more soy, and not to mention butter is-! Too much butter is not good for anyone either, okay? Jus- just knowin' that. And I want Jack, Joe, David and Frank spend all their time playin' Nintendo Switches togethar, yay!! (shuffles something off screen) Curse ya, damn dirty trolls, I hate trolls so much then... I get, I love y'all so much because you make up the fanbase among which I like the good better than the bad, and if you don't like that- that's not- that's to- not raaaad. And yes, BronyCON 2018... if I get there, will be the best year of our lives! (pants) Oh, yay! Thank you!

Message to Dio Brando, Plus I Need a New Phone!

Chris records a video with his webcam after breaking his smartphone and not being able to connect to YouTube with his PlayStation 4. The video consists of begging fans to pay for a new smartphone, and fulfilling a request by "Jack Z" to shout random-access humor. For some unknown reason he disabled the ability to comment on that video.

Bizarrely enough, Chris worries that Dio Brando, the central antagonist of the manga/anime series JoJo's Bizarre Adventure, is threatening his True and Loyal Fanbase, and promises that Dio's efforts to troll him will not succeed. Throughout the video, Chris mispronounces "Dio" as "Dye-O".

Please, buy and help me get a new phone now. 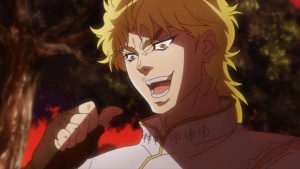 You thought it was just another troll, BUT IT WAS ME, DIO DYE-O!

Hello everybody, this is Christine Chandler, coming to you live from home once again. This time using my webcam on my laptop, because I have a special emergency announcement: my phone battery is seriously having troubles, so that's why I can only record on this, and my PlayStation 4 is also still not connecting to YouTube. So *sigh* anyway... er, so the first announcement of the day is: please to allow me to be able to keep my money so I can... possibly go to BronyCon later. Still sorting out other details before I can purchase any tickets or anything, but it's all good and safe.

But anyway, I NEED MONEY to purchase the New Phone! Or the rights to repair this one, probably less expensive to buy the NEW PHONE! And pfft, it's gonna be like a few hundred bucks, so lets buy some stuff off my eBay pleeease. The remaining Transformers I have, the Puzzler Combiner, the... [thinks] Prowl, all the others. There is a couple on there I know that's worth a hundred dollars, between the Prowl with the bots and Puzzler. Anyway, please help me. I NEED A NEW PHONE! This ones really w-wonking out on me. It's been wonking out on me bad, for a while now.

Anyway, aside from that. I have a special message, which I have written down right here on a few pages. Anyway, so I have been warned by a s-somebody who... about the nefarious trolls who are plotting to cause mayhem for me at BronyCon. I know who you are, Dio Brando. I know that you are trying to use your Stand Power, The World, to screw things up for me and my True and Honest fanbase at BronyCon.

You will never win, Dio! My fans are the Stardust Crusaders, and they will never- we will never allow you to gain victory. And so be it, if my power- if my powers are able to and if I can make it over there. Er, I don't know about variables or anything, but anyway, SONICHU WILL BE IN ALL OF OUR HEARTS!

Show the love, spread the love, fuck you Dio Brando. Aha! We know who you are you bastard.

Anyway, so t-there's that message to Dio Brandooo! *grunt* And, in case you haven't noticed yet - yep, this is a new shirt. I just got it from Goodwill recently, also [pans camera down] these track pants... slacks, light grey. Okay? [pans camera up] Yep. So, there's a new outfit for me, this fugly green sweater and track pants. Mmmm anyway, so aside from that, still gonna recolour my hair. The remaining Teal Bottles are still up for sale on my eBay, there is three of those left now. So... all of them with my autograph on them. And the one empty one, that's a bonus to go with the Wii Fit Meter that has my data on it. Because "one persons trash, is another persons treasure."

So, yep. And that near empty one has my autograph on it too. So, take that as you will. Thank you all very much. Have a good safe da- [video ends abruptly].