From CWCki
(Redirected from Secret Shipfic)
Jump to: navigation, search 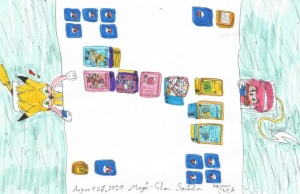 Sonichu and Rosechu attempting to understand the magnitude of this card game's autism.

Twilight Sparkle's Secret Shipfic Folder or TSSSF is a fan-made My Little Pony trading card game that satirizes the Internet phenomena known as shipping. Unsurprisingly, Chris has latched onto this card game, presumably learning about it at BronyCon 2019, and has produced a number of original cards for the game based off of his Sonichu characters and those of others, not unlike his Wall of Originals. Like his attempts at making Yu-Gi-Oh cards, his custom TSSSF cards have lost sight of the original game's mechanics and have simply become another creative medium for Chris. He has created well over 129 cards so far, with countless more seen in the numerous spreads on Twitter and in Youtube videos.

Chris simply uses a template linked from the website of the official TSSSF page.[3] Consequentially, the card types (meant for pony characters) do not match the subject matter of most of Chris's Sonichu recolor cards and instead have types shoehorned in (such as Sonichu being typed as Earth Pony). For the physical cards, Chris uses a website called Make Playing Cards.com or MPC, a print on demand site similar to Lulu but excursively for custom trading cards.[4][5]

Now there is more Zap to add to the TSSSF Sonichu and/or Core Deck with more Sonichus and Rosechus, including a few more cards of the Primes.

Sonichu and Rosey have an ever-expanding family of friends and allies with the more Special and Regular Sonichus and Rosechus coming out of the other areas and even Dimensions. With more at the fray, it's time to Zap It Up even more on the Shipping Grid.

TSSSF Sonichu Deck or Core Deck are required for playing the game with this Expansion Pack. This Pack contains 54 Cards

Into the fray of Fan Fictions and Shipping Fodder enters our one-and-only Special Half-Unicorn/Half-Sonichu, Nightstar, and her friends and family from Equestria.

The author of the "Sonichu" books in Equestria, Nightstar is a very unique unicorn who not only has powerful magics, but heavy psychic powers, electric abilities, and mach-speed running. She is not only friends with Princess Twilight and the rest of the Mand 6, but also the background ponies, and all of the OCs. She is even friends with THE Mary Sue and Gary Stu. And now, they're all heare in this crazy game of Shipping. Let's all work together to help each other in our many various ships.

This pack also includes a few #horsefamous OCs from the Brony Community, and the presently fully updated versions of the Mane 6, as they ARE and should be chronicled, peoperly, as not fan-fiction; literally Canon.

TSSSF Sonichu Deck or Core Deck are required for playing the game with this Expansion Pack. This pack contains 45 cards.

When just being yourself is not enough for the battles against your foes on the Shipping Grid to save the innocent beings from being abused isn't enough, it is about time to Mega Evolve for Battle!

Witness the Awesome Power of the Sonichus and Rosechus with either their Mega Stones, or the seven Chaos Emeralds, with the rarest Powers able on the grid. Time to take down a bunch of bad guys and save everyone from the infamous type of shipping there ever is, with the Seriously Evil Kind.

Note: there is a set of new rules for the use of these specific type of cards; please, consult the additional Rule Card, enclosed with the others in this pack, and add it to the other Rule Cards in the Deck. Zap It Up!

TSSSF Sonichu Deck is required for playing the game with all of the cards in this pack. This pack contains 19 cards

Massive and Chaotic Turmoils were what IdeaGuy had in mind, but the tables ended up being turned.

Late Octover of 2017 started a life-changing sequence of fated events for me, Chris Chan, and everyone in Dimension C-197, that also crossed into this very Dimension 1218, thanks to this Dimension's IdeaGuy, and his OC self-counterpart in C-197, Johnson Wiles. There were so many Awful things the two of themtogether had wrought up til April, 2018, when the chaos and havoc were finally cleaned up and undone. I have had to develop and learn from Everything that has happened. And in the end of it all, I ended up becoming fully awakened as a Goddess: the CPU Blue Heart of the Commodore Consoles.

And now the the few alternate Sonichus and Rosechus, and some of the events, come into play into the Secret Shipfic Folder. Time to stomp out and undo a bunch of seriously awful events.

This Expansion Pack is a companion to the events Chronicled in ("Sonichu" #13): "The Awakening of a CPU, a.k.a. The IdeaGuy Corruptions".

TSSSF Sonichu Deck or Core Deck are required for playing the game with this Expansion Pack. Contains 15 cards.

With the help of the other Sonichus and Rosechus, we expand our social circles and defensive forces. We also have a lovely party together.

Sonichu, Rosey, and the other found Specials, are not alone in the worlds, as there are many other Sonichus and Rosechus who have their own lives and their own stories to share in our worlds and Dimensions, as well as help us and work with each other. It does astound and please us to have them all with us, together, to be friends, allies, and warriors alike.

The number of these Sonichu and Rosechu OCs that have been made and discovered by their respective Creators, Artists and Authors shows how much love, kindkess and support Sonichu, Rosey, everyone else and I are humbled by and appreciate. The ones featured in this pack are but a small fraction of the vast number. This compilation is one way to show my appreciation to eveyone.

Thank You All. <3 Chris Chan Sonichu.

TSSSF Sonichu Deck or Core Deck are required for playing the game with this Expansion Pack. This pack contains 40 cards.

Putting an end to the Endless War with SlimeCo.

The show so far: Nightstar Sonichu got ahold of a sample of the Smooze and accidentally got some in her green eye; she then saw into Dimension C-197's Arizona where the worst kind of warfare was going on. Recognizing Phantom Horn and Strawberry Milk as Trolls with Good Hearts, she sends them both to look into the situation. PhH. and S.M. wandered the streets, as they were forced to go into mining slime that was a result of the company of SlimeCo in the city of New Los Angeles City, a.k.a. New Milwaukee, Arizona. After suffering from the violence, hatred and the worst possible kinds of Trolling, having learning their lessons from the experience, they pray for a solution to these set of problems. I show up, personally, to set these ending wheels into motion. -Chris Chan Sonichu.

Mini-comic strip, "Slime and Punishment", chronicling the events prior to this point was written and drawn by Ben Saint.

TSSSF Sonichu Deck or Core Deck are required for playing with this Expansion Pack.

Christine Weston Chandler Sonichu (Chris Chan Sonichu) is the (in)famous author/creator of Sonichu and Rosechu, and the Nation of Cwcville, VA. Magi-Chan Sonichu is the guardian over the Sonichu and Rosechu species of Pokemon, as well as the Guardian Angel, Mentor and Devoted Husband to Chris Chan Sonichu. Both Chris Chan and Magi-Chan are prolific and powerful, and they also enjoy the finer and simple things in life. Among which, they dabble in Fanfics and Shipping, and inserting themselves where needed. Shipping themselves to make more allies and friends.

But, in this situation, they ship each other, their friends, and their families together, regardless of relation, orientation, species, or harmonious or clashing fur, hair, mane and coat colour combinations.

In order to help them fulfill their efforts and goals in bringing everyone together against the forces that want to harm us, you can help us write perfect and crazy fanfics. You take turns expanding the shipping, joining Sonichus, Rosechus, Humans, Ponies, and what else with Ship cards.

If you are the first to make one of our narrative Goals a reality, you earn the points for that Goal! Of, you also earn the shame and glory (depending on how you look at it) for enabling the penchant for shipping us and our friends and family, but nobody is perfect.

This Deck can be played with or against the original Twilight Sparkle's Secret Shipfic Folder (TSSSF) Core Deck and past-printed Expansion Packs and Promo cards.

This Deck includes a combination of Four Start Cards, and the Goal, Ship and Pony Decks to make this a game many people can play together; contains 172 cards of the finest Lightning and Psychic Power.

I am a Special Half-Human, Half-Sonichu, and I am the CPU Blue Heart of the Commodore Consoles, and I have established friendships and allyships with the other deities. One might complain that I am over-powered, and they'd be right. But we have over-powered villains as well, and I can't take them down alone.

And now, you wield a huge sample of my psychic powers and abilities in your hands in this play on the Shipping Grid. How will my power be served to better help Everyone? This aspect is up to you, and I shall do my best. Zap It Up!

TSSSF Core Deck or Sonichu Deck are required for playing the game with this Expansion Pack. This pack contains 40 cards.

Autobots, Transform and Roll Out! We have to join the battles on the Shipping Grid to keep all of the innocent individuals from being decimated by the Decepticons!

Now, you have the chance to play with a few of the bots of Cybertron in this Expansion Pack featuring Son-Chu, the other local Autobots of Cwcville, and the Decepticlones of the Private Villa of Corrupted Citizens.

Transform the Shipping Grid Today with this pack.

TSSSS [sic] Core Deck or Sonichu Deck are required for playing the game with this Expansion Pack. This pack contains 21 cards.

Description Can't Wait to get these cards? Don't have enough to make the first order to get a set for free? Well, here is the alternative to getting this lovely set of 18 cards.

Villains and Trolls Unite! The time has risen for our retribution against Christian Weston Chandler!

Flash back to 2008 with the Sonichu Villains Expansion Pack, featuring some of the iconic villains from the Sonichu comics (and Chris Chan's life, for real) back to ruin your love quest! Maybe this time, you can find common ground, agree to disagree. Who says all villain bretheren have cold hearts?

This set is based on past, outdated interpretations and should be enjoyed at that. A Homage to the Classic Chris Chan (and Christine Chan) Sonichu.

This pack was a compilation assembled by "The Sergeant At Arms"; check out his channel on YouTube, and I, Chris Chan Sonichu, personally approve and endorse. This Expansion Pack contains 45 cards.

While at first these prices seem highly exorbitant, the prices are high for a reason. With shipping included, Chris is actually selling a few of these packs at a near-loss. The custom card printing company Chris uses offers bulk discounts, however rather than taking in all orders (if there are any) and shipping them out at a determined point in time, Chris instead ships out orders as they come in, adding extra and potentially unneeded costs.