This page lists the stuff Chris offered for sale in 2014 to 2015, many of which involved his Sonichu business.

On 6 December, Chris announced that he would not be able to produce or sell his artwork until 1 January 2015, as he and his mother would be busy moving back into 14 Branchland Court after its renovation. But nothing happened on this day. Instead, about two weeks into the new year, Chris silently removed all his sale items from his account, making no mention of it on Facebook. Finally, on 2 February, he announced:

Of course, given that he was due to appear in court in three days, he was taking a big risk in guaranteeing that he could fulfill orders.

In 2014 Chris used eBay extensively, not only to hock portions of the hoard, but also to sell original artwork, which drew considerable attention from his fans.

The first hint of this uptick in activity was on 28 May, and involved Chris's effort to sell what he listed as a "Straduarius" violin which had belonged to his father. Chris stated that he and his mother desperately needed to sell this family heirloom for some quick cash, even though at the same time Chris was begging his Facebook friends for expensive LEGO sets. 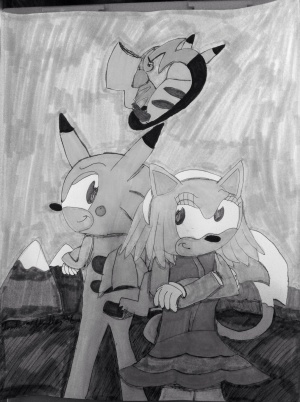 "The main image for this sale was edited to prevent forgery during listing, but a sample of the color is the secondary photo."

On 1 June 2014, Chris listed an Original Sonichu and Rosechu Drawing, with bids reaching over $10,000 in the first day of listing. Chris offered to frame the drawing and ship it in bubble wrap, but "ONLY when the art is Bought Now for the full price". The listing was taken down mysteriously the morning after, but then reappeared later that day. Over the span of eight days, Chris attempted to force this piece of "work" to be sold at an exuberant price, only for it to be taken down repeatedly, forcing eBay to temporarily ban him. He finally sold it for $200 on 1 July.

Over the next several months, Chris listed six more drawings of his Sonichu characters, managing to sell at least one.

On 1 July 2014, Chris listed autographed photos of himself for sale, at a price of $20 each. Chris offered to write personalized messages in addition to his autograph, as long as the requests are "Not Offensive". In the eBay Q&A for the listing, he approved "All that is down is only the floor" as a message, and indicated that he may possibly wear the Sonichu medallion for an autographed photo. Indeed, a new photo of himself bedecked in the famous medal was soon on offer. Unfortunately, he stated that his red and blue "The Classic" rugby shirt was lost to the January 2014 house fire, so it would not be available for photos. By 24 July 2014, 58 photos had been sold. He offered more photos for sale in June 2015.

Also on 1 July, Chris posted listings for commissioned drawings, in either black & white ($50), color ($100), or color with frame ($200). By the end of the year, at least 9 color drawings, 10 B&W drawings, and 2 framed drawings had been sold. Prices had also been reduced, and various sales and package deals had been offered.

In September 2014, Chris began mass-producing his famed Sonichu medallions on eBay. These proved to be very popular, and many recipients posted their prizes on the CWCki Forums for the world to see. Over 200 had been sold by the summer of 2015. Chris occasionally offered free medallions with the purchase of commissioned drawings or original pieces. A dramatic twist involved his dispute with one "Mr. Smith," whose complaints won him a special "angry eyes" Sonichu medallion.

Starting April 2015, in line with his demands to his quadrillions of adoring fans that they vote for Sonichu to appear in the upcoming Smash Bros. game, Chris expanded his merchandising endeavor and began to sell Sonichu Amiibo. Chris's customization process for the generic Sonichu Amiibo involves taking a new and functional Sonic Amiibo, breaking all the limbs off, reattaching them in a janky and unnatural pose with Krazy Glue, attaching Pikachu ears and tail, and slathering the whole thing in glossy paint to give it that "child's art project" look. So far, Amiibo of Sonichu, Blake, the Chaotic Combo, his family members, and himself in various points in time have been put on sale, as well as Amiibos of Mary Lee Walsh, Count Graduon, Silvana, Simonola, and Sonichu's children.

Bizarrely, while Chris seems to be sculpting the Pikachu ears for his custom Amiibos out of CRAYOLA FUCKIN' MODEL MAGIC, the tails seem to be taken from Pikachu Amiibo. As Chris could simply take the parts from any old Pikachu toy and likely save himself the money on both Pikachu Amiibo and Model Magic, trolls can only speculate on why he would choose to do it this way. Chris makes barely any return on these custom jobs--with Sonichu Amiibos selling at $41 each, Chris stands to make about $11 per Amiibo sold, losing almost his entire profit margin on P&P and eBay fees alone. Chris sold out the entire stock of his first run within hours of announcing their existence, which means he probably made about a hundred dollars, or, in Chris's terms, five Lego minifigs from some eBay scalper.

The verified Sonichu Amiibo purchases have, so far, arrived in less than pristine condition.