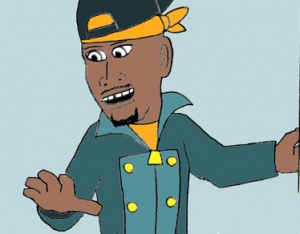 Lars Is Jivin'.MP4 is an extremely racist video Chris uploaded on 30 September 2010, after a discussion with Jackie earlier in the day. In it, he addresses Lars again, comparing a toy boat he sent Jackie to a tape dispenser. Chris then decides the best way to get his point across is to throw the tape at his camera. He removed the video just a few hours after uploading it. He later uploaded a new, longer version on 2 October. The extended edition includes Chris using stereotypical black words such as "yo," "mofo," holding up a picture of a black rapper and then dressing him as a turkey and throwing up gang signs.

Judging by the unusual video format (Chris normally makes videos in .MOV format), and the blindingly obvious jump-cuts, it would appear Chris has actually taken some time to edit this video. Unfortunately, it's safe to say that this was to hide the fact he failed to hit the camera with the tape on the first take.

[stares angrily at camera, cocks head; jump cut] Oh yeah, one more thing, Laaaaahz. You know--s--you sent her the dangin' ol'...BOAT, made out of popsicle sticks...and a weak condom wrapper for a sail. You know what she did with that? [brandishes tape. It appears to be Scotch or a generic store brand] This your bo--

[jump cut to Chris throwing the tape at the PSEye; he then turns the felled camera towards him] She threw that piece of shit away! That little piece is cheap as shit. It was so cheap, it was as cheap as that tape dispenser! [stares off into space for a moment, bewildered.]

[Another jump cut and moment of awkward silence] I'm out, peace!

Yo Lars, listen up yo. I got a b- I got a bigger message to tell ya! Imyaghda- I been tellin' you before, I been kinda civil, but I gotta yell it out to ya. JACKIE IS OVER YOU! You jivin' turkey! An' I tell you somethin', I tell you something' else, yo. She left you because of all the goddamn boats! [producing a sheet of paper] Now I'll read to you what she told me, and I quote: "You wasted all your money on all them stupid boats!" And you le- and she left you! Because you would never... treat her right or take her out anywhere because of it. [Gangsta hand gesture]

And she got fed up with all the goddamn boats all over the goddamn apartment! [garbling somewhat] Half of them not even taken out of their package! Because- because you just bought them for the sake of buying them! [puts down the paper and looks outraged] I mean, you mofo! You took -you even bought ridiculous paint and accessory kits for boats you didn't even own! You paid for a whole bunch of useless stuff you're never going to use anyway, you jivin' turkey!

Down the jivin' yo'self, mofo! [Flashes both middle fingers before turning them upside down] I tell you somethin' else. You ain't never gonna get her back. She's been LONG over you, boy! All day long, all week long. She and I are going to be ... ['tapping' an imaginary Jackie] I be tapping that sweet ass of hers. [Continuing to mime] I spank her ass because she wants it. She asked me for it! And you know what, she ain't- you ain't gonna get that request no mo', mofo! Jivin' turkey! You ever come near us, I'll beat yo' ass! [as he squeaks 'beat' he punches his hand] Beat yo' ass to the whole- the other side of the state of [punches his hand a few times, in a likely reference to a Three Stooges skit] Texas, where my dad went to, except for a while. [continues up to transcript above]