From CWCki
(Redirected from Pokemon GO)
Jump to: navigation, search

For the original creation by Nintendo/The Pokemon Company, see Pokémon. 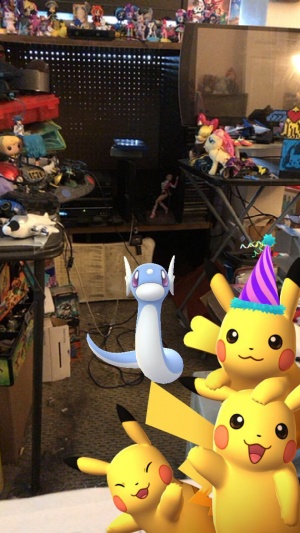 The stains are temporary. Look into my eyes, for they are forever.

Pokémon Go is a 2016 augmented reality (AR) mobile game developed and published by Niantic in collaboration with The Pokémon Company for iOS and Android devices. The game consists of players physically travelling around to find and catch Pokémon that randomly pop up on the map.

On release, the game became a massive hit, attracting players like Norwegian prime minister Erna Solberg.[1] Although the craze has largely faded, it maintains a significant userbase, including Chris.

Chris and the game

Chris was a fairly early adopter of the game, joining many who downloaded the game in 2016. Chris immediately took up the game, wandering around the Ruckersville and Charlottesville areas capturing Pokémon. Chris continued to play the game fairly steadily even as the fad surrounding it died down, and he at some point came to see it as proof of the Dimensional Merge.

Chris would sometimes photograph his collection at various locations both inside and outside his home, providing a partial tour of his residence in the process. It also provides observers a decent impression of how Chris views reality, given that he actively believes that CWCville and his characters are real.

Chris has been shown to be very invested in the game, almost to the point of addiction. At BronyCon 2019, people travelling with Chris noted that he would be "hatching eggs on Pokemon Go.. while at stoplights." This shows that Chris is hooked on the game to such an extent where he spends much of his time invested in it.

Chris's photos of his house give Christorians the closest view of the Chandler abode and surrounding lands in years, revealing the damaged and rotting state of 14BC

Being a mobile game in 2020, the game relies on revenue from microtransactions and special event ticket fees. Chris has spent 14.99$ on ticket fees for the PokemonGOfest2020 event, a 2 day event on 25 and 26 July.[2] How much more of the tugboat is wasted on this is unknown.

Relationship with the merge

Chris appears to use Pokémon Go as a sort of coping mechanism: the augmented reality nature of the game allows virtual Pokemon to exist within the same frame as a real-life location (i.e 14 BC), re-enforcing his belief in the Dimensional Merge.

Chris has tried to get his house accepted as a PokéStop in the game, despite residences not being allowed for consideration.

In April 2019, he recorded Sonichu Headquarters Google Intro Video to promote the idea.

In August 2020, he reached Level 40 in Pokémon Go, allowing him to nominate a location, choosing his house (calling it a temple at this point). However, his application was rejected.

As of 2020, Chris still actively plays Pokémon Go. Chris has tweeted his Pokemon as part of the 2020 Go-fest, while continuing to roleplay as Sonichu.