Difference between revisions of "TooManyGames" 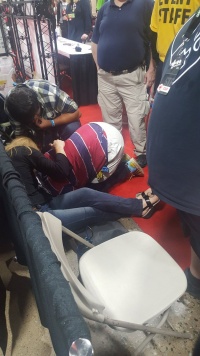 Chris, after being told he was being removed from the con.

TooManyGames is an annual three-day gaming convention currently held at the Greater Philadelphia Expo Center in Oaks, PA. Chris attended the convention in June 2018. He wore The Classic for Day 2. He had also brought along his baseball bat. Due to the convention coinciding with the Guard Dog saga, members of the group - Null included - came to Chris's aid online after hearing of what happened, but ultimately nothing came of their involvement bar planning to make sure Chris was supervised at conventions from then on.

He had started a GoFundMe page to help cover costs, as he had narrowly avoided foreclosure on his home one month before. Three people donated $120.[1][2]

Chris acted very inappropriate towards many of the guests there by kissing and/or touching them, especially those who took pictures with him. This eventually culminated in him being thrown out. 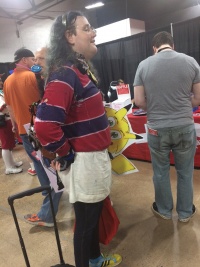 Chris with a Sonichu standee.

An event coordinator for the con, Justin Silverman (of Silvermania), arranged for Chris to have a guest badge to the con. According to Silverman himself, he knew Chris would accept his free offer, regardless of the GoFundMe outcome.[4] Silverman's invitation is as follows:

Despite proposing otherwise in his email, Justin did not authorize Chris to host a booth or a panel slot.[4] The 12:30 PM Sunday panel mentioned was likely the Exploring Cringe Culture panel, hosted by jab50yen, whom Chris would reunite with at the con nonetheless.[5]

While at the con, Chris met many of his fans and posed for photo ops. He offered autographs for sale, against con rules as he had no credentials to sell there. He also watched panels and played games, including Halo.

On Day 2, Chris attended Bowser vs Robotnik — a panel hosted by Mike Pollock and Kenny James (the voice actors of Doctor Robotnik and Bowser, respectively). Based on the video's introduction, it suggests that the hosts allowed members of the audience to roast them. Given Chris' history with the Sonic franchise, Chris took the opportunity to interact with Pollock, as well as to plug his own franchise. Chris stated that Eggman should return to using his original Robotnik name, as the reverse of his current name sounds like "Nah I'm gay". 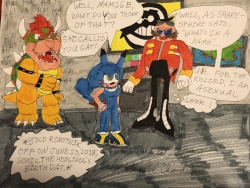 Chris: Aha! Oh… Mike, you’re gonna make a dream of mine come true ‘cause I’ve enjoyed every scene where Sonic got to insult Eggman, and I’ve got one that I came up with recently. And I just want Eggman’s reaction by the way.

[Chris holds up a copy of Sonichu #10 to Pollock]

Ah, my Sonichu. In case you don’t know. I’m creator of the original yellow but I transform to this one. And I’m encountering Eggman, and Bowser [Chris gestures to Kenny James on stage] can laugh if he wants to, if he likes it!

So… Eggman. Let’s talk for a moment. You like wordplay? All right!

So, I’ve got a good reason for you to go back... to-uh calling yourself Robotnik. ‘Cause spelled word backwards? You say Eggman? That's saying... "Nah-I'm gay". You split it up a little bit further, it sounds like "NAH! GAY!" And at least Kintobor sounds more sophisticated than that! So what do you have to say for you now-say for yourself now, Namgge?

Mike Pollock: WELL, I BELIEVE WILLIAM SHAKESPEARE SAID IT BEST WHEN HE SAID... “WHAT'S IN A NAME? That which we call a rose by any other name would smell as sweet.”

[The audience laughs and applauds as Chris takes a bow]

Previously identifying as a lesbian just the year before, Chris' Namgge roast—using homosexuality as an insult—harks back to the early years of the internet's discovery of him, when weens accused him of being gay to get a rise out of him. Seemingly, Chris never gave a second thought that his middle school tier roast could be labelled inappropriate by the LGBT community he belongs to.

Satisfied of his witty statement, Chris took to the paper and drew an in-universe representation, featuring Chris Chan Sonichu, Robotnik and Bowser.

Chris posed with many fans for photos, as he had done at BronyCon and MAGfest. However, this time, after Idea Guy had manipulated Chris into thinking of himself as bisexual and Chris began a habit of kissing men on the cheek (as he did to Copitz and his friend), Chris thought it would be fine to kiss attendees on the cheek after posing with them.

On Day 2, as a result of being handsy with and kissing attendees,[7] Chris was kicked out of the convention.[8][6][9] He reacted by having a meltdown in the venue, curling up on the floor in the fetal position.[10] Security was brought in to escort Chris out.

Several hours later, Chris tweeted, claiming that con staff had not given him a verbal warning before kicking him out.[12]

On the other hand, according to jab50yen, who is close friends with staff, they said they had given Chris face-to-face warnings.[14]

The next day, Chris backtracked, trying to justify his actions and showing he learned nothing:

Joshua Moon posted a conversation he had with Chris about the incident,[17] in which he warned Chris about the possible ramifications of his behavior. Notably, the moment he exceeded the hurtful truth level, Chris reacted by drifting off into his imaginary land, posting a lengthy diatribe about CPU Goddesses (which is translated here).

On 27 June, event coordinator Justin Silverman consulted with a CWCki editor to clarify his role in bringing Chris to TooManyGames, and give his side of the story regarding whether staff had warned Chris before kicking him out. To authenticate his claims, he attached unseen photographs of Chris' meltdown:[4]

Twenty minutes later, Chris had an abrupt shift in his tone:[20]