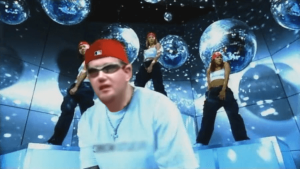 Rollin' and Trollin' is a video of downtown CWCville (really downtown Charlottesville) uploaded on 17 July 2009 in which Chris attempts Kaufmanesque humor. Notable is a video message to real life trolls, including several CWCki editors. The key component of this message is that, in a shocking turn of events, Chris was engaging in the most elaborate trolling scheme in history, and has duped us all masterfully. (If only that were true.)

To sell the deception, Chris changed his look to have:

Of course, the disguise unintentionally gave away the truth: the lack of the ring and medallion suggested that Chris was not entirely TRUE and HONEST when he made this video, something that he indeed confirmed later. Chris also is continuing his pattern that started about a month before of sometimes not speaking clearly; however, his dialogue is especially unclear here at many parts.

In his Internet Dream Lounge podcast interview, according to Chris's recollection, the cameraman was the mysterious Magical Man–a friend of Chris's gal pal Kim Wilson. This was confirmed by a comment on a fan video of the Magical Man Potion video on December 2, 2017.

[Note: an annotated listing of the locations featured in this video has been created on Google Maps.]

[Music, in the form of "Escape from the City" from Sonic Adventure 2, plays as Chris walks down the street]

Chris imitating an announcer: Hi we’re coming to you live from CWCville today. We’re over at the CWCville pavilion. The, uh, Hedgehog Boys and the, uh, master Christian Mayor the, uh they for day, uh, come here every Friday night and, uh, and it draws a crowd, uh, and it’s very good, y’know. [Shimmies clumsily] This gives me some, uh, business from amongst the population that comes around.

[Music plays as Chris walks down the street]

Chris: Ah yes this is our graffiti wall in the mid- uh in the middle of the, uh, city of CWCville in the metropolis. The, uh, fee- the, uh, children are, uh, enjoying it obviously and this is also part of our beautification project in the city and we and I gotta say that the, uh, project just looks fantab- fantastic from here. It all looks very good. I tell you what. “Give me the liberty to know, to utter and to argue according to conscience above all liberties.”

Cameraman: So how do you feel about President Obama and his economic policies? 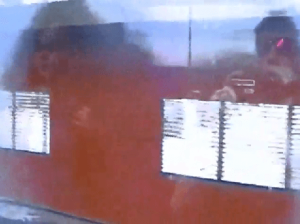 Contrary to popular belief, the cameraman (on the right) seems to be a pretty normal guy.

Cameraman: How do you feel about President Obama’s foreign policies with countries like Iran and Iraq?

Cameraman: President Obama, being a family man, what is your opinion on his character?

Chris: I think he’s a regular stand up family guy.

During the Obama questions, Chris's voice pitch was in the style of how his voice becomes very high-pitched when he lies.

[Music plays as Chris walks along talking and gesturing at the sky. They arrive at the Timberlake drug store.]

Chris: Ah, yes, the old Timberlake drug store. It’s been in the, uh, family for generations. The, uh, only, uh ss- generation that, uh, has not been able to run it is the one that went on to a singing career.

[Outside a bar named Rapture. A clothing store called Vivian's is clearly visible]

Chris: Alright, well, since the, uh, bar s- since the bar law has been repealed, the drinking law, the this here’s the first bar to open up. The, uh, Rapture, uh, in the city of CWCville. Ah, also known by the nickname of, uh, R2. 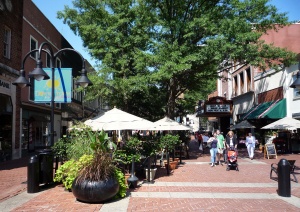 Chris: Over in downtown CWCville the honor the, uh, death of our dearly departed, uh, bodyguard of mine, BILLY MAYS. He sacrificed his life in an assassination attempt from m- from me and, uh, is doobly honored in downtown CWCville. We build this building. [Camera pans to a derelict apartment block.] To be completed in a few, uh, the towers n-, uh, the building the buildings will be the BILLY MAYS Tower and will serve as the new commercial site in the commercial center.

And now some words to our fans

Chris: Hey Xantos (sic), man don’t ya be waggling that carton finger around at people. [Flips off the camera] Hey Delabonte, you wish you were as cool as Doctor Ivo Eggman. [Punches the air, gives V-sign] Tie day is groovy, maaan. PeachyKeen is always awesome [V-sign turns into Shocker sign] wasn’t just in a decade it’s forever. Ulala, now reporting for Space Channel 9, is that yoouu in that picture? Hey, Cosmos, you wish that I could feel ya’. Anthony Sullivan, you’re nothing without BILLY MAYS, you’re nothing with BILLY MAYS and if you want to talk about cock building look at BILLY MAYS memorial right behind me. Okay, El Misto, you don’t like my beard so much [Camera zooms in on his chin] I’ll tell you much it was a present form uncle Scrotor. Tez-manian Devil, some people have oily skin [Camera zooms in on his forehead] it doesn’t mean that their hygiene is bad. How about instead of the, uh, water that doesn’t work so well how about I rub you off my face! Hey double C D, yeah the Robotech Era is over Gundam overshadowed it. Arrrg, Neckbeardedone, quit lurking in ye shadows and step up and be a real troll. Hey Rachmaninov [In air quotes] stop dissing this chick. Man up will you? Captains log star date Velour Fog? Zap Brannigan? What’s the deal with that? I’d punch you in the face like Leela does. [Swipes at the air] Hey Morden, yeah we kissed but that’s not all: I hit that like the fist of an angry God.

Chris: Hey, I’m not near-sighted that was a rules [ruse]. If you want to see what they really do gimme a sec’. [Puts glasses in front of the camera. With a whoosh and a hum, the scene becomes posterized in reds, purples, and greens, mimicking the infrared sight of the creatures from the Predator movies.]

A few thoughts on Optimus Prime

The final word about the greatest troll in history...

Well the, uh, truth comes out. I’ve never been autistic, I work forty hours a week to support my parents, this has all been a trick, [camera zooms in on Chris as he points his finger] you have been trolled.

[Music plays while Chris does his victory lap]

Christian Weston Chandler as Himself

Special Thanks: The Field Agents of CWCVille’s Security Taskforce

The Private Villa of Corrupted Citizens

And the silly trolls everywhere, for the many lulz you have provided.