Difference between revisions of "Christian Weston Chandler...Yep, I'm on TV :)" 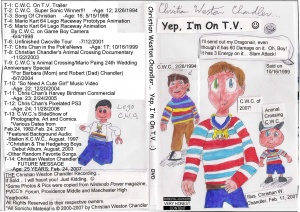 Naturally, since this relic was so profoundly important in Chris's mind, the trolls had their curiosity piqued greatly over it. Eventually, a copy was obtained by LordSillynipples by posing as Chris's childhood friend and first crush, Tiffany Robinson.

From 26 February 1994, shortly after Christian's 12th birthday. News anchors on Charlottesville NBC affiliate WVIR report him winning a Sonic the Hedgehog contest and earning a $1,000 shopping spree for video games. The pinnacle of Chris's entire existence to date, this event fueled the delusional manchild he is today.

Filmed on 4 June 1998. Hey, do you like Mario Kart? Do you like Lego bricks? How about stop-motion animation? More importantly, do you like hearing the same 15-second clip of music played over and over and over while you watch grainy black-and-white 8-bit footage of Lego men getting into car wrecks? Have we got the clip for you. By the way, Lego Chris wins the race. No surprises there.

Filmed 22 November 2003. Chris gives us a long tour of his custom-made towns in Animal Crossing for the GameCube, that's about as exciting as watching paint dry.

Filmed on 28 November 2006. Chris enters another contest requiring him to shill a product in under a minute, this time a PlayStation 3. To answer the question "What would you do for a PS3?", Chris first explains everything he would like to do but won't (e.g., save up the money and go to a store), and would but can't (forsake a cure for autism), before revealing that he has constructed a PS3 from Legos and Pixelblocks.

Chris presents a long, tedious slideshow of images taken from 1982-2007, projected from his PSP. In the background, he plays a self-made radio broadcast from 1998, which gives new insight into his past.

Filmed 24 February 2007. Closing the DVD, in celebration of his milestone 25th birthday, Chris delivers an address summarizing the lessons he has learned in his life and how they should be applied by future generations of "ladies and gentlemen and dudes of all teenages."

After the DVD was leaked onto the internet, Chris claimed[2] that the trolls didn't have the "Director's Cut", which includes footage of Chris's Christmas from 2004 and takes from the Pixelated PS3 commercial. The trolls long thought that the "Director's Cut" was just a bluff he used to save face. That was, until December 2014, when it was revealed that Catherine acquired a copy and handed over some footage to a Kiwi Farms member to upload to YouTube, thus proving its existence.

Filmed on 25 December 2004. Chris videotapes footage around the house while discussing C-Mas. Notable for being made when the hoard was in its infancy.

Filmed on 25 December 2004. Chris bitches some more about gal-pal Sarah Hammer and the continuation of his Love Quest.