Originally uploaded as "CWC Update 05222009". Chris uploaded this video to address statements made on cwcville.com by an unknown persons who had gained access to the domain. As usual, Chris's top priority is to dispel any false allegations or claims about himself. Chris explains that he has closed the cwcville.com domain and has no plans to reopen it in the future. He also says that he won't be making as many videos in the future. Chris seems surprisingly cognizant of the fact that, if he stops producing content on the internet, then the trolls will have no new material to use against him. This is most likely the result of Rocky's guidance.

Chris is aware that if he disappears from the internet, his loyal fan base will be denied his masterworks. His solution is to advises his fans to track down the trolls if they're bored and have nothing better to do.

Most notable in this video are two awkwardly long periods of silence in which Chris is either staring into his PSEye or down at the monitor to check how he looks. Chris seems to be struggling to assume the appropriate facial expression, and—being Chris—never succeeds in attaining it. The precise emotions Chris wishes to convey from 1:16-1:27 and from 1:40-1:45 may never be known.

Chris again plugs his Fuck Quest and how he will only accept face-to-face meetings, unless you call his father and work it out through him. He ends the video with the phrase "see y'all on the campus", likely referring to the University of Virginia.

The new, post-Julie model of the Sonichu medallion is briefly shown, as is often done, to validate the contents of the video.

[inhales deeply] I [voice cracks] wish to, uh, let y'all know that—uh, please disregard the, uh, statement that was on the—uh, on the, uh, cwcville.com front page… as that was obviously—that was an obvious lie, made by the trolls, who hacked into my… account.

But anyway, I also would like to announce that as of this moment, the, uh, website… is down. I have closed the account associated with it. I may come back with a new webs—with another website and new st—and new comics and stuff; I may not.

But... to my loyal fans: I thank you for your full—for your support and appreciate your efforts, but… so, uh, what y'all can do now is, like, y'know, find—go to your normal lives, uh... live free. Or… if you want somethin’—if you have nothing to do, you can track down the trolls for me, dis—including that Clyde Cash.

Down with those slanderous trolls! I give them no more food to feed off of! [places hands on hips in a mock pose of authority]

[stares silently at the camera for a good ten seconds] 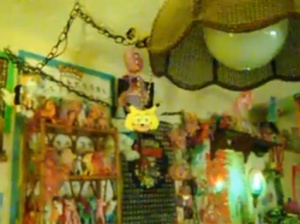 [begins moving eyebrows strangely as he watches himself on his monitor] I'm straight, and I will only accept person-al—person-to-person encounters. No e-mails, no phone calls. Unless you call m—on my h—home phone, and talk to my father… [stops in mid-sentence and stares silently at the camera while seemingly ticcing] …and you gotta be living in Virginia, ladies! 18 to 27... smoke-free... caring, true, honest. Not black.

And the trolls? Just… stay away, period.

Y'all have a good day now. Peace!

Oh, and, also, before I forget... I w—until the day I put up the website... again, if I should decide to… or not... I wi—I will not be puttin' up an—too many new videos either. So... any videos that are obviously, uh, falsified with my face that might say otherwise... do not believe them. Only—uh, I will let you know, obviously, when the website is back up. [holds up ring] You will know it is true.

Meet till then. See y'all on the campus.