The Tale Of The Crazy Pacer 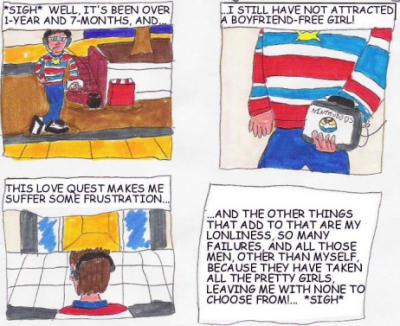 "The Tale of the Crazy Pacer" is a blog entry by Anna McLerran, under the name "Anniebananny," on 5 February 2005. It details her experiences with Chris near an Abercrombie & Fitch and Pac Sun in the mall.

Arguably the most notable independent account of Chris, this entry disproved any suspicion that Chris was a troll or an elaborate hoax.

Okay, I've put this one off long enough. It's time for the story of all stories: The Tale Of The Crazy Pacer.

Once upon a time, there was a guy who paced in front of Abercrombie & Fitch. He'd come and do it for hours on end, just walking back and forth. He was an okay-looking guy, not evil-looking like Creepy Molester Dude. So he would pace for his allotted time, then leave. Sometimes as he paced, he would sing or shout. Nobody really could ever tell what he was saying. Oh yeah, and he always wore the same shirt, a nice little long-sleeved red and blue number that had a gold crest on the left side, and white collar and cuffs.

Eventually, I guess he got bored of just pacing like that, because he started to bring his Gameboy SP with him. He had his headphones hooked up to it. So he would pace like that, all the time. His peak hours were usually between 2:00 and 4:00, and he usually left by 5:00.

Then, one day he decided to start pacing on the Pac Sun side, so he started pacing in front of our store. I think the people at Abercrombie were relieved, because they were worried about the floor out front getting worn down.

So this one day, on the day it started (it will be explained in short order), we were doing floorset, and Lin Lin noticed that Crazy Pacer kept looking into Pac Sun as he paced, and she also noticed that he has a fair amount of junk in his trunk, if you know what I mean. And Star and I both noticed at the same time that his jeans were high-water. And we all laughed at him. Noooo, actually we were laughing with him, he just didn't know it, and he wasn't laughing along. And this day, he was acting particularly crazy. He'd pace and pace, then stop and shout something at the wall, then keep pacing. And he also did some singing, even getting into the vibrato falsetto junks, it was hilarious.

So anyways someone, I can't remember who, suggested that the next time he looked in, we wave at him. Whoever suggested it should die, unless it was me, in which case I feel I have received enough punishment.

Of course, he looked in, and we all waved at him. He looked kind of bewildered and sort of scared at first, but quickly caught on and waved back. Then he went back to his pacing, but he was looking in to Pac Sun with greater frequency now. And any time anyone would make eye contact with him, he'd wave.

I had to go get Star an iced tea from Sbarro's, so I left and waved at Pacer as I went out. When I came back, he was sitting cross-legged on the floor outside Pac Sun, and he took the initiative and waved at me first. I smiled and waved back, but the smile wasn't to be friendly, it was because I thought it was hilarious that he was sitting on the floor like that. Good thing he couldn't tell the difference.

So we went on about our business, doing floorset and junks, and a little while later, he came in.

I was kind of apprehensive about this...I mean, I had been doing floorset all day and I didn't really feel up to dealing with another crazy...but he came right up to the counter that I was standing behind, and he looks right at me, all fidgety and twitchy, and he goes, "You look to be about 19 years old, right?"

I busted out laughing, because he guessed it right. Star was laughing too, over from the sidelines where it was safe. "That's exactly right," I affirmed. 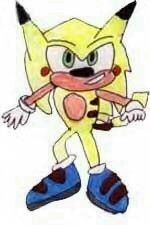 "See, I know these things. I can just tell how old someone is," he said, kind of proud and still timid at the same time.

"My name is Christian," he said, "but you can call me Chris. I'm Christian W. Chandler."

"So," he continued, "Do angels have names?" (I found out later that he meant to say do angels like you have names...poor guy was so nervous he didn't get it right)

"Sorry, I don't go for pick-up lines," I replied, kind of laughing.

His face kind of fell and I felt sorry for him, but he pressed on. "Oh, I'm sorry, I didn't mean to insult you, I was just asking your name. So what is your name?"

I was pretty grossed out by the pink-eye story, but I told him anyway. "Sometimes blue, sometimes green, and usually gray."

"So do you want to, you know, go get some ice cream when you get off work?" he asked.

"Okay, well, Anna, is there any way I could, um, get your phone number, and maybe I could give you a call sometime?"

"Ah. Well, do you want my phone number, then? You can call me on my cellphone."

"Oh!" he said, brightening, and started to say something else, but I cut in.

His face fell again, but this time I felt no pity. "All right," he said, fidgeting, "Well, um, do you have access to the internet?"

I nodded, and he went back to his "spot" where he kept his two tote bags and his Sam's Club cup. I turned to Star and she was all, "Dude he is so weird!" and I was like, "I know! Make it stop!"

So Christian came back, and handed me a card with a crudely drawn Sonic the Hedgehog and some other yellow Sonic-looking creature on it, along with Christian's name, email address, and website. It was a homemade business card. "That's my email address, and you can just email me sometime, okay?"

"Okay," I said, not intending to email him at all.

He left the store, packed up his things, and went. His work for the day was done. But the story does not end here, my friends, oh no. He came back. Not the same day, but the day after that.

On 8 February, Anna made another post, alluding to a "Note," presumably something to do with the Love Quest.[1]

Oh yeah, and Sonichu came in and visited for a little bit, but I really didn't feel like having him there. I WAS nice, though. I was nice. So after he left, Shorty wanted to know what was up with him, so I told her, and showed her The Note.

Chris did not know of Anna's blog post until finding it referenced on his Encyclopedia Dramatica page, and even then he paid little notice to it. However, towards January 2008, Chris was contacted by a person who had gotten a bad impression of him based on Anna's blog post. On 27 January 2008, Chris emailed Anna and inquired her as to whether or not she was really the author of the blog post in question, and asked her to delete it if this was indeed the case.[1]

Chris's email to Anna on 16 March 2008 appears to be a response to a reply Anna wrote to the email mentioned in the above paragraph. It's not fully clear from Chris's second email if Anna admitted to being the author of Tale of the Crazy Pacer. Regardless of what Anna told Chris, the tone of Chris's second email was cordial.[2] On 17-18 December 2009 Chris uploaded to the CWCipedia a response to his Encyclopedia Dramatica page in which he demonstrated knowing that Anna was the author of Tale of the Crazy Pacer.[3] Despite this Anna and Chris continue to be friends.