"29 September 2009" (officially "09292009") focuses on Chris's claims of a "Director's Cut" version of the DVD. He also claims Gregg Mays and Clyde Cash to be one and the same, and reiterates it several times in case the viewers are as dense as he is.

He's not dressed in one of his usual shirts in this video, and he doesn't seem used to the lack of a collar because he keeps bunching the shirt up to keep the medallion's band off of his neck. Given the shirt, the sweating, the messy hair, the wavering voice, and that this took place when Chris was in contact with Kacey, it's possible that Chris had just returned from a jog when he made the video. And was about ready to pass out.

[adjusts glasses] Let's get a few things straight here. Hmm. I, uh, would like to, ah, propose and puf- move forward the supposed copyright stealing which I am here to prove that it is false, because, you know, that is only an image; you can type anything in, make it look like whatever in Photoshop. And, also, this Gregg Mays, I know for a fact that this guy is Clyde Cash, or the past character of Clyde Cash, because Clyde Cash used the [cleans his forehead with the shirt he is wearing] "GreggMays@gmail.com" email address to pretend to be a Gregg Mays to—of some sort of video game company or something... but he later admitted that he was Clyde Cash!

But, anyway, I dis- I did my web searches and all that of Clyde Cash and Gregg Mays. Other than the, uh, fake pictures and whatnot, there is no record whatsoever of this [removes his glasses] Gregg Mays or Clyde Cash. I even, on any of any of the, uh, addresses or birth dates that they provided... [puts glasses back] that this guy has provided in any form or matter, from when h-, I think from communication or hacking or whatever, this G- Gregg Mays and Clyde Cash—this guy has been acting as either one of those guys. Gregg Mays and Clyde Cash were b-are and were both fake. They're nonexistent. Just like in the acti-just like in-o-on the TV sh- on the, just like TV actors and I-I like these, uh, these following people. But just like, Gregg Mays and Clyde Cash—they're about as fake and fictional as Elaine Benes from Seinfeld, Chandler from Friends, or Monica from Friends, or Phoebe! Or even Archie Bunker from All in the Family, Fred Sanford on Sanford and Son, and George Jefferson on The Jeffersons. I would like to reiterate that I like those actors and, and the characters they portray... but I- I mean I have yet to see this guy [cleans sweat from his forehead] actually show his face in real life ever, sh-showing off his photo ID with his name, either be-, either being "Gregg Mays" or "Clyde Cash" or whatever—whatever his real name is, the one that his mother gave to him at birth.

And I even throw in the question about him ever actually going out to Australia and having his forced way with my past Australian gal pal who died in the Australian brush fires. I mean, there's—if this guy never existed, he never went to Australia. Even Robert Simmons claimed to have gone there and witnessed the whole thing, and he was a proven troll! So, therefore, I fur—I further emphasize the fact that this Gregg Mays is a fake, a fraud, a phony!

And I even come at—he just hides behind his mother's skirt, [removes glasses] would never dare to show his real life face, or show who he actually was. And I actually question his relation to the bee-yotch troll, Vivian Gee! I question that. 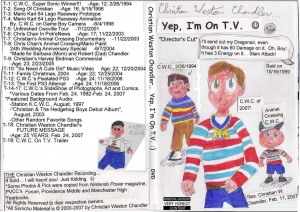 Cover and contents of the Directors Cut.

[leans forward, to grab a DVD case] Oh, and another thing—about as fake as every last one of those supposed pieces of merchandise on that quote/unquote Sonichu store. Even a DVD! I have heard rumors about even past vicious content being copied on the DVD, aside from the printed list on the back of the DVD. And you know what? You got less than what you bargained for, the first guy who got a copy of my DVD! Even though all that stuff was real, I have the director's cut: the one and only director's cut. And how it differs from the distributed copies: only the director's cut has the videos from my family's Christmas, 2004, age 22, December 25, 2004. And, also, even the first PS—Pixelated PS3 attempts, where I had the [grabs his PS3 with his left hand] Lego PS3—Lego/Pixelblock PS3—and actually had it hooked up a, um, thing—a makeshift Lego PSP to PS2 to USB connector, you know, like, uh, to connect a PS2 controller to a PS3 console. And I hooked up my Guitar Hero, my PS2 guitar to it, and actually played "Thunderhorse". While this was shown, I was actually playing on my original PS2.

That and more photographs, more stuff in the slide show differs from the distributed copies that were [cleans forehead again] distributed amongst family and whatever, and what this guy got... is only on the director's cut. Read for yourself! Read it for yourself. Title 11: "The Family Christmas", and title 13: "The First PS3 Attempts". Look on the back of the, uh, distributed DVD! You'll see what I'm talking about. And you know what? It don't even have that nice little label on it... or the list of family members and relatives! Or even the horoscope from my 25th birthday, February 24, 2007.

So... y'all didn't get as much as ya got, ya dang, dirty trolls. Y'all didn't get all the stuff that was originally on the DVD, [adjusts his shirt's collar, so that the Medallion's chain can't touch him] 'cause you did not get the director's cut. So, anyway, Sonichu's copyright is still mine. It's still mine, and I have officially registered it! And I reiterate, this Gregg Mays—Clyde Cash—whoever he is, he is a fake! I dare him—I challenge this individual... who plays these characters... to actually come out to [cleans forehead] my home address and show and reveal and show hims—and prove himself to me, whoever he is. And I know it's the same guy, 'cause I heard his voice recently over the telephone and recognized it from the past times when I talked to quote/unquote Clyde Cash on the phone. That high-pitched, drunk, whiny, nasally... voice of his! That same God damn voice... I remember it so well.

Alright, well, anyway, I'll leave you with all that, and I am still drawing the pages for the Number 9 book, and I am working on the Number 10 book, as well. Only from me, Christian Weston Chandler (birth name "Christopher") of Ruckersville, Viriginia, USA! And, also, I would like to reference the public disclaimer video also on my You—on this, my ori—my offish d—on my official YouTube account, and everything Sonichu and Rosechu officially is on the CWCipedia, AKA... "The Original CWC's Sonichu Site", also known as "Sonichu and Rosechu Site". All other websites (aside from this YouTube and the CWCipedia) are false! Peace out, and have a safe day.