Difference between revisions of "Dimensional Merge"

For the video where Chris talks about the merge, see Dimensional Merge Announcements. 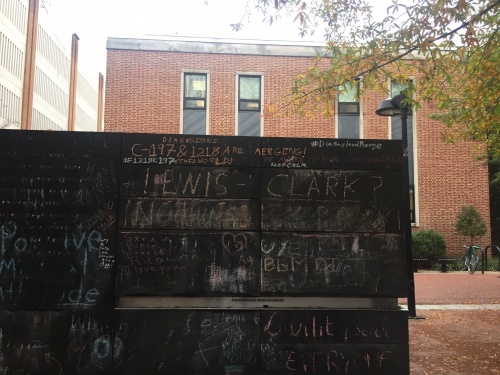 Chris warns downtown Charlottesville of the impending merge on its Free Speech Wall.

The Dimensional Merge is the event in which Chris believes that "Dimension 1218" and "Dimension C-197" (respectively, the universe of real life, and the parallel universe where Sonichu and other fictional characters live) will combine, bringing fictional characters into reality. Chris is convinced that he is the designated liaison of the event and will become a deity as a result, giving the appearance of a doomsday cult leader. First announced in October 2018, the Dimensional Merge's beginning on 18 November 2018,[1] to align with the Jonestown mass suicide, revealed it to be a troll fabrication. The Merge was expected to take place by the end of December 2018. Naturally, when New Year's came and went, Chris began backpedaling but remained insistent that the Merge would occur.

Trolls had put the idea of the Dimensional Merge into Chris's head, and have encouraged it ever since. A Teen Troon Squad member claimed the idea to have originated with the Idea Guys, but added, "we discouraged the idea at first",[2] implying that they later began encouraging Chris to believe. In the months since then, several weens have also pretended to believe in the Merge, enabling Chris and trying to win him over. As the default latching-on point for trolls and the dominant meta-saga in Chris's life at present, the Dimensional Merge has replaced the classic Love Quest after its surreal conclusion in early 2018.

Chris has always believed that an alternative dimension where every fictional character exists. Throughout 2017, Chris appeared convinced by the Idea Guys that the Sonichu and Hyperdimension Neptunia universes actually existed, but in a separate dimension.

In July 2018, Chris tweeted at Marvel writer Seanan McGuire, asking him to confirm the "dimension number" of "this Earth". McGuire responded with "Earth 1218", and later clarified that this was the Marvel universe's designation for the real universe. Chris took it as gospel, and subsequently uses "1218" to refer to the actual, existing universe. Weeks later, McGuire reiterated once again that everything was imaginary, but Chris' response to McGuire and various trolls indicates that he still believes that people such as McGuire can communicate with other dimensions.

Over the summer and fall of 2018, Chris met with the Teen Troon Squad, people who gave him weed, pretended to be possessed by Sonichu characters and that the universes would merge.

Chris believes that he is wealthy in CWCville, and that when the dimensions merge, he will have access to his money there and he able to pay off his current, real-world debts with it. He has asked to borrow money from people, claiming he will pay back ten times the amount once the merge concludes, not realizing he sounds like a more autistic version of the nigerian prince scam.

He followed up on 23 October with:

Remarkably, he has done little begging in the wake of the lawsuits. This has surprised many, considering the immense amount of times he has groveled online for money in the years 2016-2018. He has instead chosen to stick his head in the sand and pretend that the Merge will solve all his problems for him.

Beliefs on the Merge

While eating at McDonald's, Chris scribbled down the math for how many people will be killed in the Merge on a napkin.

Chris announced the event on 14 October 2018. On 26 October 2018, Chris posted a video entitled "Dimensional Merge Announcements" where he outlined the process of 1218 merging with its "sister dimension" C197, where every fictional character known to exist resides. He believes that once the merge occurs, Earth will be shared by humans and various characters. He clarified that the merge will cause extensive loss of life on both sides, such as the deaths of almost half of Earth's population. 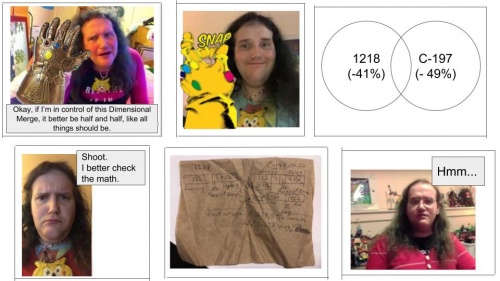 Naturally, he believes that he will be guaranteed survival because he "absorbed the spiral seal" from his Sega Dreamcast and is therefore the middleman between the two dimensions. He believes that himself and Megan are basically deities, and that he will gain superpowers following the merge because of his belief that he is half-Sonichu.

He sent dozens of follow-up tweets further detailing the process, explaining that Cwcville would replace northern Virginia, Gotham City will replace a portion of New Jersey, and Equestria will take over the entirety of Maryland. He explained that this will resemble a natural disaster scenario and that mass evacuations may occur during the merge.

On 18 November 2018, Chris announced that the Merge had begun[1]. This date coincides with the anniversary of the Jonestown mass suicide, implying that the Idea Guys had originated the Merge concept, as their calling card was inserting infamous historical dates into CWCville lore.

In early December 2018, Chris reported feeling "psychic headaches" and associated the merge with the California wildfires and the romaine lettuce recall. As the merge drew closer, he claimed to have "lightning powers" and that the "millions of volts" of electricity in his head is evidence that he is half-Sonichu. Without giving a time estimate for the merge, he tried to dispel doubts by claiming that he can "touch and feel" Magi-Chan and Cryzel Rosechu. He estimated that the merge would conclude by the year's end.[3]

On Christmas 2018, someone claiming to be Magi-Chan logged into Chris's Twitter, posting a Pastebin dump containing the dox of one of the Teen Troon Squad's members. They also stated that the Merge would actually take place in 20 years due to time dilation, and that Sonichu residents of C-197 would need to hibernate until then.

Naturally, New Year's Eve of 2019 was an eagerly awaited moment as the final chance for the cataclysm to occur. In the early morning hours of 1 January 2019, Chris spoke out on Twitter in a New Year's address, explaining that the Merge had not happened on time due to "red tape", betraying some internal bureaucracy in the process of becoming the tranny-goddess of 80s computers.

He remained insistent that the event would still occur, adding in reassurances that the Sonichu-verse was still "Awake" to remind everyone of the Magi-chan doxxing's non-canon status.

The context behind Chris's aside about Arfoire was revealed in screencaps Lukas leaked on /cow/. In them, a person purporting to be the Arfoire-possessed Jessica Quinn PMs Chris over Facebook, saying she had tricked Chris into believing in the Merge:

However, the attached post from Lukas[4] suggests that Lukas had been posing as Quinn in an attempt to pass the blame onto her:

Despite Chris stating that he would abstain from talking about the Merge online until further notice, he went on to mention it the following day while writing about the health problems "superpowers" that he got from it.[5]

On 4 January 2019, Chris said that he was awaiting further information on the merge, more indication that the entire merge event had been scripted and fed to him by trolls who were no longer in the picture.

Particularly troubling about Chris's comment is that he wants more information in order to verify that his delusional thoughts are real. By admitting this, he highlighted a path for new trolls to get into his head, showing he failed to learn from the Idea Guys saga. Several eager weens rushed in to fill the gaps in Chris's knowledge, though by mid-June 2019, Chris had apparently become overwhelmed with these, and has since turned to other, more credible sources.

Continued hope in the merge

After the first deadline for the merge had passed, Chris remained optimistic that the merge would still happen at some point.

While he was initially quiet about it, he began ramping up the rants about the merge again around spring.

Several merge-related tweets followed in April, in which he claimed that people in Japan were seeing OCs[7] and blaming the Notre Dame church fire on a Pokémon.[8]

Several events around this timeframe give context for Chris's renewed interest in the merge:

On 13 June 2019, Chris claimed that he had been consulting with Jesus Christ, and that Jesus has been helping with the dimensional merge, which would be finished in the "near-coming days" - but without giving an actual set date. Chris also mentioned that Jesus has been preaching this at churches and in Pokémon gyms and yet needed Chris to help get the word out by posting to his protected Twitter account.[9] Naturally, after indulging his fantasies on the matter, Chris begged for money[10].

As July 2019 began, Chris tried to demonstrate his divine abilities through #PsychicPowers, a pair of videos in which Chris drops items from his hand by the ideomotor effect. On 8 July, he tried to assure his TRUE and HONEST believers on Twitter that the Merge's effects would be 'MILD and TEMPORARY', and continued his long trend of attributing random events in the news as harbingers of the Merge. On 10 July, Chris, via his Magi-chan sockpuppet on Twitter, complained about the many uninspired trolls who have tried to take advantage of the Merge to exploit Chris.[11] This has not prevented the Multidimensional White Knights from attempting to weasel their way into Chris's inner circle.

The Merge's future course is subject only to Chris's whims, and is not dependent upon Chris's deteriorating finances, his aged mother's declining health any other events in 1218. Originally supposed to be complete within a few months of its announcement, it is now nearly complete and yet continues to be pushed further into the future, as nothing in Chris's world objectively changes except the identities of his enabling rivals for incompetence. Whether Chris will abandon his belief in the Merge in the event of some external shock like Barb's death and its fallout, or retreat further into it, is something only time can tell.