From CWCki
(Redirected from Dirty, Crapped Briefs)
Jump to navigation Jump to search 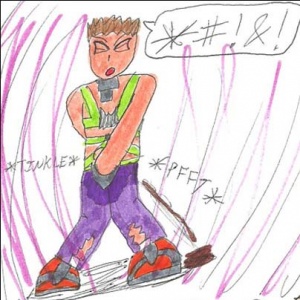 Naitsirhc shits himself and wets his pants.

DIRTY, CRAPPED BRIEFS is a trollish shorthand used in reference to Chris's troubles with fecal leakage. Coined by Chris himself in an IRC chat from January 2009, it has quickly become a popular catchphrase.

In short, Chris unwittingly shits himself often. Even after encouragement from his doctor and from his mother, Chris would refuse to wear butt garments because, according to the Ivy Q&A, he felt they were for babies. He had only one or two episodes where he wore the butt garments; though they were only worn because Ivy told him it was his punishment for cheating on her with Vanessa Hudgens. Based on his own comments on the subject and those of people who've managed to get close to him (particularly his now-deceased sweetheart Ivy), stress tends to inspire these episodes, but at other times he appears to be too lazy, careless, or distracted to bother making his way to a toilet.

Chris first alluded to difficulty controlling his bowels during a December 2008 IRC chat with PandaHalo, where he admitted that he sometimes mistook a bowel movement for gas and shat himself as a consequence. He said it did not happen often, and replied with an emphatic "NO" when Panda suggested that he wear adult diapers to deal with the problem.

Ground zero for the CRAPPED BRIEFS phenomenon was 20 January 2009, when Chris made a bizarre slip while arguing with Clyde Cash and BILLY MAYS on IRC. When prodded by the trolls concerning his alleged fondness for wearing women's underwear, Chris angrily retorted, "I have NUMBERS OF PAIRS OF DIRTY, CRAPPED BRIEFS." On further prodding from the trolls, he went on to reveal that most of the time he didn't even realize he'd crapped his briefs until well after the fact. Why Chris felt the need to surrender this information is beyond our understanding, although given the context of the conversation (Clyde accusing him of wearing his mother's panties), Chris may have felt that offering more details on his supposed preference for male underwear - namely, that he wears them enough to shit in them - would reinforce his point.

Later, during the infamous Julie Reveals Herself episode, Chris shat himself in mid-conversation while sparring with BlueSpike. Shortly before "Max" forced Chris to shove his medallion up his ass, he asked if Chris had lost control. Chris first shouted "MAYBE!", and then gave up and admitted "...Yes." 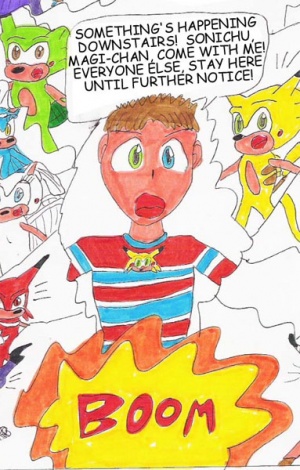 Chris's typical reaction when "something happens downstairs" in public.

On 28 April 2009, Chris admitted in a video that he craps his pants when he's stressed and claimed that it's perfectly normal, comparing shitting his pants as a grown man with a baby defecating in its diaper.

On 1 December 2009, Chris refused to offer advice to a Mailbag correspondent who suggested that she had some degree of fecal incontinence, claiming that the topic was personal, and that he refused to talk about it.[1] Given Chris's gloried history of bad taste and indiscretion, this drawing a line between what is private and public could be a milestone. Or, perhaps, he just found the idea of a girl who shits herself to be too icky for his tastes.

Further evidence of Chris's discomfort in talking about the subject lies in his choice of dated vocabulary. Rather than calling toilets a "toilet" or a "john", Chris refers to them formally and in an antiquated Southern fashion as "commodes", as if he's embarrassed to mention them. Yet ironically, DIRTY, CRAPPED BRIEFS are not a personal subject.

In an AIM chat conducted on 20 October 2010, Chris revealed to Jackie that on many occasions where he turns what was once white into brown, it slips out painlessly and that he doesn't know until he sits down. In fact, he had shat himself at the exact point where she asked about the term "DIRTY, CRAPPED BRIEFS". He blamed it on "stress" that he had from earlier in the session, which involved recalling tales of high school bullying. He then stated that it had happened in previous chats between them and that they might have a "psychic link."

On 30 October 2010, Chris revealed how he handles crapping himself in public. He admitted that when he loses control, he goes into the nearest public restroom, walks into a stall, and wipes his ass and shitty underwear with toilet paper. Otherwise, he waits until the drive home to clean himself up. Yes, everyone, he openly admits not only to shitting his pants, but also to driving home with shit smeared all over his ass. This adds to the ever expanding list of reasons not to accept a ride from Chris.

In a June 2011 post on the Tomboys and Tomgirls of Virginia forum, Chris revealed that he now only wears panties and refuses to wear briefs.[2] Ironically, Chris's desperation to prove he does not wear women's underwear is what led him to reveal his "problem" to the world. No word on whether or not Chris has had to deal with DIRTY, CRAPPED PANTIES yet, although evidence suggests he has. 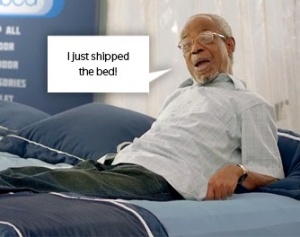 Ivy's postmortem account of her time with Chris sheds some more light on Chris's incontinence issues. Chris has had trouble controlling his bowels ever since he was a child, she says, but the problem became more acute after he finished school, especially whenever he got stressed out.

In the spring of 2009, the subject had become a source of serious contention between Chris and Barbara. At the time, Chris would inconsiderately toss his dirty underwear, still fully loaded with excrement, in the family's communal laundry basket. Eventually they brought up the problem with their doctor, who advised Chris to make changes to his diet and exercise routine, and possibly wear protective garments.

Chris didn't think much of these suggestions, especially the notion that he should wear "diapers" — "That's for babies!" was his comment. At first, Barbara tried to force the issue by refusing to do his laundry, in the hope that Chris would either wear the diapers or actually do the adult thing and start washing his own clothes. Of course, Chris did neither; a short while later he was called by a troll who pretended to be Clyde Cash and made a series of death threats, making Chris genuinely afraid for his life and leading to him dropping a massive load in his sheets while asleep that night. After that, Barb relented and started washing Chris's laundry again.[3] As of now, thankfully for us, we have yet to see the after-effects of the DIRTY, CRAPPED BED.

Additionally, given the filthy condition of the Chandler house, this is also a straight-up guarantee that Chris, Barbara, Bob (when he was alive), and nearly anyone who enters his house enters a dung cave of no escape: having to deal with Chris' shit leaves you coated in it, both metaphorically and literally.[4]

It's a particularly Chris-like sort of irony that he finds the suggestion of wearing diapers an insult to his maturity level, but sees no implications regarding that same maturity in the fact that he routinely shits his pants.

During the Tomgirl Saga, the Man in the Pickle Suit leaked images of Chris holding a box of feminine hygiene pads[5] and explained the context:

In 2015's A little song and dance, a box of pads is clearly visible behind Chris, while he "dances" in his bedroom.

In a paid video from 2016, Chris knocked over the camera, revealing an upskirt shot of him wearing a pantiliner. He reacted angrily to comments about it[6]: