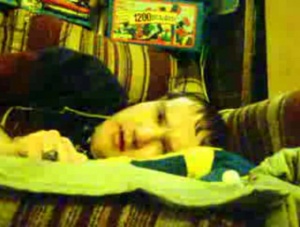 Stress is the bane of Chris's existence.

After high school, Chris had to face the fact that he couldn't blame his shortcomings on his autism. Thus, he began to use "stress" as an excuse. However, it's assumed that Chris is probably confusing "stress" with depression or anxiety, refusing to admit that he is in fact, unhappy with his current situation. Given the intensely sheltered lifestyle his parents provided for him well into his twenties, it is highly unlikely Chris ever experienced any form of intense anxiety or pressure that would give him severe psychological and physical effects, apart from his consistent paranoia over getting trolled and, in recent years, the Financhu Crisis. He is, however, prescribed medicine for this "stress". Since Chris tends to exaggerate everything, anything that makes him feel remotely uncomfortable is classified to him as a stressor.

In his prime, under the effects of "stress" Chris typically posted videos without his glasses and talked in a more meek voice. It is during these periods that Chris would opt to remove himself from the Internet for brief period, and then come back feeling refreshed, rejuvenated and given a new resolve to finish Sonichu or his Love Quest. This is most likely due to his autistic regenerative abilities that make sure that his heart never goes below 0% and into the negatives. In recent years, Chris has sought other ways to alleviate his stress, some of which causing irreparable damage to his psyche.

Chris's message in the comics whenever his laziness stress gets the better of him.

Seeing that much of Chris's adult life has been defined by his dealings with trolls, it's no surprise that trolls are the primary source of his stress. As early as 31 December 2008, Chris has admitted that he received stress from his internet fame.[3]

Chris also has heavy financial problems, which became such a focus for Chris in 2016 that he barely did anything else that year except for begging on the internet for money.

A fair amount of Chris's stress comes from things he held irrational hatred for at any point in his life, specifically his former hatred of homosexuals. This was used to the trolls's advantage several times.

Back in the days of his Love Quest, his failures at getting a boyfriend-free girl gave him stress. He would call himself a "virgin with rage," and would constantly try to touch or otherwise act sexual towards women he knew, such as Megan.[4][5] Chris claimed that his hormonal stress was so great that he drew ShecameforCWC.JPG just so he could stop himself from sexually assaulting Megan.

The biggest upset to Chris's life since his discovery is arguably the death of his father, Bob Chandler, from heart failure in 2011. Although other factors also played a part, Chris's internet activity slowed to a crawl, with him choosing mostly to post on Facebook. The destruction of 14 Branchland Court by fire in January 2014, and the aftermath, was another major event in Chris's life that he cited as stressful.[6]

Chris has often claimed to have gotten stress from stressors that others would consider trivial. Most of the time they end up showing off Chris's hypocrisy, as he gets upset over habits and actions that he practices. For example, in the same IRC Chat where Chris discussed his internet fame, he also stated that he received stress when Bob didn't wash his hands, even through Chris himself isn't a hygienic person.[3]

One does not need to be a expert physician to know that this much stress has had negative effects on Chris's health, especially since he doesn't have a proper way to deal with it (as discussed below.)

For one thing, stress has caused even more damage to Chris's wellbeing than his lifestyle already has. In August 2013, as seen in the quote above, Chris indicated through Facebook that his stress was beginning to take a toll on his health. Stress is also one of the primary causes of Chris's incontinence.[8][9]

However, just as Chris has used his autism as an excuse for practically every inconvenience he causes, it comes to no surprise that Chris is also willing to use stress in the same way. For example, Chris has claimed that stress from dealing with trolls drawing Rosechu with a penis and calling him gay caused him to draw the hardcore sex scene from Sonichu #8,[10] when in reality anyone can tell you that it was because of Chris's overenthusiastic desire to assert his straightness. Chris used a similar excuse towards Megan when she confronted him for drawing ShecameforCWC.JPG, and that ultimately made things worse.[11] Most infamously, Chris has often cited stress as the reason why he doesn't add anything to the Sonichu comic,[12][13] a claim that many observers view skeptically, given Chris's lack of any real responsibilities (and his refusal to commit to the few responsibilities he does have).

Over the years, Chris has developed a wide variety of ways to deal with stress.

From the beginning of the Sonichu comic, Chris has dealt with stress by rewriting stressful events in his life to glorify him. The Sub-Episodes of the first four issues were based on real experiences that Chris had with security and law enforcement. The initial primary villain of the comic, Mary Lee Walsh, was Chris way of getting revenge on the former dean of student affairs at PVCC for preventing him from soliciting sex, while her partner in crime, Count Graduon, was a representation of Chris's negative feelings regarding his graduation.[15] Almost everyone of his trolls that wasn't a gal-pal was rewritten into a cartoonish villain that barely put up a fight. For years, CWCville served as a place where Chris word was absolute.

Because of Sonichu's status as Chris's go-to coping mechanism for dealing with stress in the past, he has gone to great lengths to prevent outside interference. Because of this, the dystopian state of the government of CWCville is largely formed by Chris's attempts to maintain control over his life. When BILLY MAYS was proclaimed mayor of CWCville,[16] Chris was quick to rebut this, declaring himself as mayor-for-life.[14]

Because Chris's views on himself has changed from a simple mayor to an omnipotent deity, he has altered the scope of this coping mechanism accordingly, from CWCville to an entire dimension.

Nostalgia is a wishful longing for the past. While many people experience feelings of nostalgia, and use it as a reaction to stress,[18] only a few base their entire adult life on it, and Chris is one of them.

One example on Chris's over-reliance on nostalgia is his views on his time at Manchester High School. Chris views his high-school days with envy, portraying it as the happiest period in his life. Because of this, he has tried to stage a reunion twice. The first time was in the video EXCLUSIVE Manchester High School 2000 Reunion Required NOW, while the second time was from August to October 2013. At the same time, his renewed interest in Manchester High culminated in the creation of a Lego effigy of the school. Within a few days of showing off the creation, however, Chris was faced with the revelation that the people he considered his gal pals had only tolerated Chris out of pity.[19] Devastated, Chris silently gave up any plans of a reunion, and instead plunged himself deeper into his Lego Manchester High creation.

Main articles: Chris and the Internet#Attempts to leave the Internet and Saga#Dark Ages (20 March 2010 to 3 September 2014)

Years ago, it wasn't uncommon for Chris to temporarily leave the internet in reaction to stress. When he did so, he would stop uploading videos and working on the comics for a brief period of time, usually a week. This is a common reaction to trolling, and it is known amongst trolling circles as "flouncing."

Chris first major hiatus brought about by stress was after Blanca Weiss dumped him. During the video in which he commented on the breakup, he was visibly depressed, lying on his side for the entire video. He stated that the trolls had made him "crash into slumber" and sighed frequently. After uploading the video, Chris went silent for a week, and it took a Q&A video to get Chris uploading again. Throughout March 2009, Chris had expressed increasing amounts of stress towards Clyde Cash. This culminated in the video "YouTube Finale," in which Chris announced that he was leaving the internet. Although this only lasted a week, it would set a precedent for Chris's activities throughout 2010. During this time, Chris, who by then was seeking the advice of Rocky Shoemaker, would announce his exile from the internet four times in the span of two months, with causes ranging from another failed attempt at getting a girlfriend, to the loss of the CWCipedia, to his troubles with Michael Snyder. After the 6 June 2010 video, Chris would not make any more finale videos for a few months. However, on 22 November 2010 Jackie called Chris out on his numerous flaws, causing Chris to leave the internet a sixth time. This would be the longest Chris went without uploading videos at the time, lasting about eight months until the Calling Out videos.

On 7 September 2011, Bob Chandler passed away, and a month later, Chris was arrested on charges of attempted vehicular manslaughter. This caused Chris so much stress that he wouldn't upload any videos for two years, and even then he wouldn't resume regular uploads until October 2015.

Thanks to interactions with the Idea Guys and a plethora of enablers, Chris believes that he is a deity known as the CPU Blue Heart, and that he is the key to an event known as the Dimensional Merge, where our dimension and the dimension of the Sonichu comic will combine. He believes that once the Dimensional Merge happens, he will have access to his money in CWCville and will thus be able to end the Financhu Crisis.[21]

One example of Chris invoking his delusions of godhood occurred in December 2019, when he discovered that ProjectSNT uploaded redesigns of the Chaotic Combo. Her redesign of Wild Sonichu particularly irked Chris, and he, already bogged down with a UTI infection, completely shut down, posting semi-incoherent tweets on 7 December. [22] A few days later, however, Chris declared that the reason he got "triggered" by it was because of "a disturbance in their Dungeons & Dragons-like home dimension of CS-89."

These coping mechanisms, while still noteworthy, are used less frequently than the above. 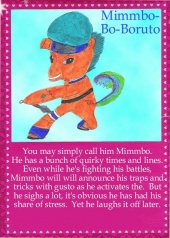 Initially an unconscious coping mechanism, Chris has made habit of sighing loudly while under duress in an effort to gain sympathy. Chris has used it in conversation to discourage further unwanted scrutiny, or to express disapproval at having his desires deferred. The places where Chris would sigh while speaking in person are noted in all of his written communication with "*sigh*." 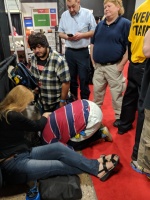 While being kicked out of the 2018 TooManyGames convention for making unwanted physical contact with other event attendees, stress forced Chris to create the hedgehog-defensive state.[24] Instead of leaving the con, he curled up into a ball on the floor and imagined he had hedgehog quills to keep the "meanies" away, eventually being escorted off of the premises by security.[23] He also blamed the trolls and an event coordinator for causing the stressful situation. It's implied that this is a replacement for the pepper spray he used on 26 December 2014.

One effect of Chris's belief that he is a deity is the belief that he can swap his soul with someone else's. When BABScon was cancelled due to the COVID-19 pandemic, Chris resorted to LARPing as Sonichu in order to deal with this.[25]