Difference between revisions of "Heart Torch of Fail" 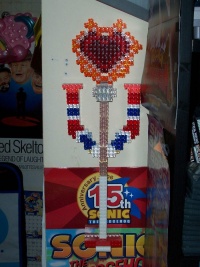 The Heart-Torch in Real Life. 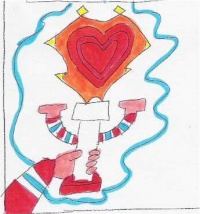 The Heart-Torch in Sonichu #4. Note the similarity between the branches and Christian's sleeved arm.

The exact significance of the Heart-Torch is unknown. Constructed from Pixelblocks, it may represent Chris's resolve to persevere in his Love Quest in spite of setbacks. In other words, Chris is "carrying a torch" for his hypothetical Sweetheart, i.e. holding out hope that he will one day find her, despite mounting evidence to the contrary.

The torch resembles a candelabra, with a long white column on a red base. At the top is a flaming heart, with a red-white-and-blue striped branch on either side, in the pattern of his favorite shirt. This is quite possibly the least offensive artwork Chris has ever produced, if only because it's an abstract sculpture; you can't exactly tell him that's not what a real Heart-Torch is supposed to look like.

The torch is perhaps related to a rod associated with Sailor Megtune, who was a "Warrior of the Heart's Light." Her staff was red, topped with a yellow star and the letter "M".[1] Since the Heart Torch was designed first, maybe this was meant to be a counterpart.

The Heart Torch was (presumably) destroyed in the 14 Branchland Court fire.

In Sonichu #4 Chris depicts the Heart-Torch as one of the items he brought with him to the Mal-Wart region. Chris's records of his real life encounter with the W-M-Manajerk mention that he had been building things with Pixelblocks while he was at Wal-Mart, so he may have built the Heart-Torch there.

After defeating B-Manajerk and Merried Seinor Comic, Chris is confronted by the W-M-Manajerk. Chris foolishly takes on the powerful cyborg in his human form, and is quickly overwhelmed.

Just as Chris begins to give up hope, he receives a vision of his ancestor, the Ancient leader of the Cherokee Clan, who suggests that Chris use the Heart-Torch to win the battle. Chris argues that the Heart-Torch is only a Pixelblock construct, and the Cherokian explains that the Sonichu Medallion would impart special powers to the Heart-Torch, and enable Chris to summon his "dream sibling." Recognizing this as a reference to the Yu-gi-oh! card Chris drew years earlier, Chris follows his advice, escaping the Manajerk just long enough to grab the Torch and activate it with his powers.

Since the Heart Torch has not been seen since Crystal's materialization, it may be that the Torch itself transformed into Crystal, or it ceased to exist after having accomplished its sole function. Of note, the concept of a "heart torch" has obvious romantic implications, even though it apparently summons Chris's twin sister.