Sonichu's Update on the Dimension Merge and Sermon - October, 2020 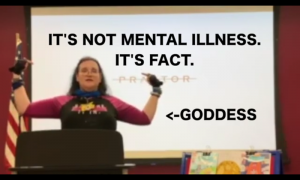 Sonichu's Update on the Dimension Merge and Sermon - October, 2020 is a video Chris uploaded to YouTube on 8 November 2020. Sonichu, possessing his "Mama", gives a rambling sermon on the subject of the Dimensional Merge. This was apparently recorded on 16 October 2020 in front of the mysterious "Praetor" team in a meeting room at the Goochland public library, and given the level of editing present in the video, was likely put together by them as well.

[A lightning effect appears on a black screen, as qthemusic154, presumably associated with Praetor, attempts a death growl. Titles written in Impact font are included, but cut out halfway through, leaving much of what is being said in the second half of the intro difficult to discern.]

[The text "A SONICHU FILM" written in Impact font appears in the center of the screen, before the video abruptly cuts to black and then to Chris at a podium.]

Chris: [sigh] Hey everybody! Sonichu here, still in... Mama's body for like... six–for like six months since she and I body swapped... uh, but anyway, so, I wrote my own little speech that talks about updates that happened since when Mama... originally talked about the Dimensional Merge... that's still in progress. She wrote about that nearly two years ago, so... I recently rewrote, and all that by hand, and I finally got... so I wrote my par–my PIECE, that, is pretty much an update on what happened since, and a little bit from me, so... the emotion and heart and everything is all there, so, let's get down to it. [sigh] So, let's see, hm, [1:07 is unintelligible], right, so anyway, without further ado, let's talk about the communities, and what y'all in 1218 here, can and should do!

[The screen cuts to black between 1:11 and 1:17. The text "What you should do / To prepare for the Dimensional Merge" appears during this time. It cuts back at to Chris at 1:17.]

[1:17] Chris – So, Mama's tweet sets... were shown to everyone in C-197, [Text fades in to the right of Chris that says "Dimension 1218 / Our current Dimension"] as well... when they got typed up... nearly two Octobers ago. Since then, the common-folk around the Earth has been... mind-set on prepwork, all of the local government peoples have consulted with our overpowered psychic types, the Justice League, the Avengers, the CPUs in Gamindustri... the world leaders, and so on, to get the details, make the plans... and kept the larger details coded down for everybody... everybody else's comprehension. And it is actually better for all to... remain calm, patient, alert, and focused, instead of overthinking things, I mean, it's nothing personal, or insulting anybody's intelligence, it's just... easier this way. Now, we gotta keep calm and focused, and all that. Think, think, think! Mama encourages that, and I'm encouraging it as well.

[2:21] Chris – Anyway, so, most of everyone has... prepared their evac kits, taken up survival and outdoor learning from various... books and educational videos, etcetera. And, in each country and city, they have their plans made out and distributed... they distributed pamphlets on those. Even President Herbert Garrison, whose pretty much Donald Trump's self-counterpart, frickin' Trump, hue, hue, hue HUE! [*Chris sighs*] Garrison called the fe–called the prepwork plans in order. Thank deities we do not have your frickin' pandemic in C-197; social distancing orders, GUH! I have my mask and shit, I mean, geez, I can wait to get back to C-197 with this body.

A series of images were released by the Watchmen on the same day, showcasing the script for this video, which was pre-written in Chris's handwriting.