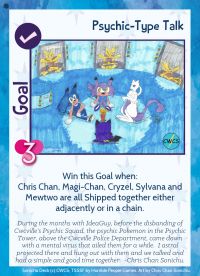 Coping is the act of minimizing the impact of stress and problems in life. In order to intentionally avoid any and all unpleasant realities Chris takes coping to unhealthy levels. People cope using multiple different ways that help reduce stress and increase performance whereas Chris uses coping mechanisms such as escapism and nostalgia which are known to be maladaptive and gets absolutely nothing done. Chris can easily be considered the king of escapism, as he does anything he can to avoid dealing with the harsh realities of his life.

Most people cope with stress using a variety of methods, including but not limited to meditating, talking with friends, sleeping, eating or playing video games. Chris follows these but has also developed some maladaptive coping mechanisms such as escapism and nostalgia. These tools in moderation can relieve stress but Chris takes them to unhealthy levels. Coping is used to only temporarily relieve stress, so a person can gather themselves and go finish the stressful task. But Chris uses coping mechanisms for months on end and gets nothing done.

In the years and months prior to September 2011, Chris displayed some degree of being able to move on and away from traumatic events in his life - he'd simply try to throw the events in question to one side before becoming engrossed in whichever new Sweetheart or Troll crossed his field of vision. Following the death of his father, Chris has lost this coping mechanism - after a protracted period of grieving, Chris instead began using maladaptive coping methods (excluding Flouncing and Death threats) that gradually evolved into their current state over the ensuing 8-9 years, among which are Escapism (Astral projection, the Dimensional Merge), Rationalisation ("I can't go to BABScon because of COVID-19, so it must be a part of the merge!"), Dissociation and Safety behaviors (Spirit possession), and Sensitization (i.e. flipping out over blocks on Twitter, resulting in the Soft Exile).

One of Chris's most vociferous coping mechanisms, and one alongside Flouncing which predates the newer examples, Chris genuinely believes that wishing death on people is a valid coping mechanism and response to stressful situations; recipients of these death threats include Trolls of the Classic Era such as Clyde Cash, Vivian Gee, Liquid Chris, Jack Thaddeus and Alec Benson Leary, President of the United States of America, Donald Trump and Vice President Mike Pence, former friend Megan Schroeder, and even every employee at Sega, to name just a small number of them. 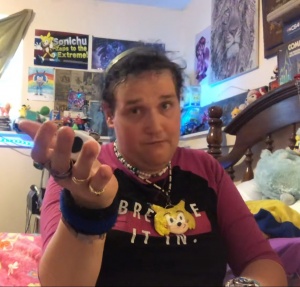 Chris has a history of roleplaying. He roleplayed in front of Mary Lee Walsh as Sonichu and read out a speech for her. In a phonesex conversation, Chris roleplayed as Sonichu, for sexual pleasure. In the 2010s and beyond, he roleplayed to escape reality. His first escapist roleplay was of Uzume Tennouboshi at the beginning of the Idea Guys saga. He also uses his sock puppet account MagiChan111448 for roleplaying as Magi-chan, how Magi-chan types without a body is something only Emmanuelle would know. He started to role play as Sonichu from 15 April 2020 (he claimed to be possessed since 31 March 2020) as a coping mechanism for the cancellation of BABScon. On 19 April 2020 Chris appeared on a livestream where he asked the host to refer to him as "Sonichu in Chris's body".