From CWCki
(Redirected from TheCWCvilleLibrary)
Jump to navigation Jump to search 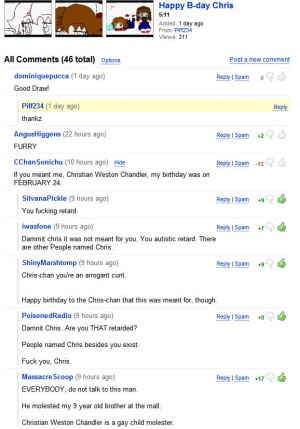 YouTube was once the primary arena in the online world of Chris, who has occasionally called it "the YouTube". His websites have gotten hacked, Encyclopedia Dramatica crashed forever, and this very wiki sucks balls sometimes, but YouTube is always up and operational, and, except during his "final departure from the Internet" in 2010, Chris has always produced new Captain's Log videos and reacted to the videos of his friends and enemies. From 2017 onward, Chris's YouTube presence started to dwindle as he shifted his online presence to Twitter, but he still uploaded videos every now and then.

For Chris, YouTube wasn't merely a way to post videos dedicated to his alleged adoring fanbase and issue broad condemnations of trolling; it was also a communication channel. Chris has posted several videos on his YouTube channel that he apparently believed would be only viewed by the people he addressed the videos to, and that they'd view the video even when they haven't been made aware of Chris's channel. He has addressed individual trolls, individual alleged fans, sweethearts and especially former sweethearts, journalists[2] and TV shows[3][4], local business managers[5] and other people within driving distance of his house. As of 2009, Chris is wary of email and other text-based forms of communication, having been burned by alleged sweethearts who turned out to have pickles. Chris has also been known to search videos labeled "Chris-chan" in order to satisfy his ego. 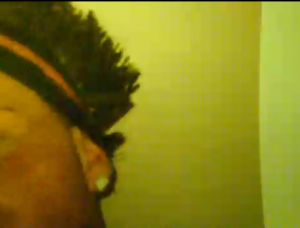 Chris also seems to lack any basic video editing skills, be it pre- or post-production. Whenever he needs to put text in a video, he chooses to write it down on a piece of paper and record it with his camera. Almost any basic video editing software, even Windows Movie Maker, has an option to display computer-generated text within the video and in the occasions that he needs to insert a TV clip, he instead opts to record directly from the TV screen, even though it would be far more prudent to insert the clips in via editing.[6]

Chris's ORIGINAL and OFFICIAL YouTube account was Sonichu, created on 8 May 2007. The account originally served to host the trailer for his DVD, his Future Message, and the clips of himself on the evening news.

On 22 November 2010, Chris uploaded a video in which he announces his departure from the Internet again. After uploading this video, Chris removed all his other videos from his ChristianWChandler account, not to update again for little more than 2/3 of a year. However, after a string of blackmail videos, Chris's account was stricken again. The account still remains open. The last video uploaded was Gratitude for a good person in N.C.

He has also monetized most of the videos which appear on this channel, as another way of profiting from his internet infamy. As further proof of his entitlement issues, at one point around March 2016, he received $80 and was "pissed" that he hadn't gotten more.[7]

This account has been dormant since August 2021, a result of Chris's arrest for incest. On the 16th, a ween hacked into the account and uploaded clips of Anthony LoGatto imitating Chris's cries of "JULAAAAAY" in "For Julie's Eyes Only". If convicted, Chris may need to register as a sex offender, which could limit or ban Chris from accessing the internet.

Many of Chris’s YouTube videos have more dislikes than likes, and where comments are allowed, they mostly range from the genuinely concerned,[8] and enablers rallying behind Chris,[9] to weens blurting out outdated memes[10] and those telling Chris to "get a job".[11]

As subject material or Chris's regrets can lead to videos being deleted, many fans archive copies of his videos on their YouTube accounts. Videos are occasionally also recorded by Chris without intention of sharing publicly, and later leaked by fans. One of the first channels dedicated to this was TheCWCvilleLibrary, run by troll character Arjen Van Dierten.

Veoh is an internet video distribution site, not unlike YouTube, launched in 2005. Several months later, Chris created a profile, "Sonichu," and used the site to upload his early videos and watch children's animation. He used his full name, portrayed himself with a cartoon drawing, and linked to his Tripod Sonichu site. He continued to upload his videos to the site into 2009, but does not seem to have given it the same attention as YouTube (understandable, given Veoh's severe lack of popularity). It is perhaps most noteworthy to Christorians as the place where his once-lost "CWC is Angry" video was found in 2009. By some miracle, it escaped the troll assault, and still exists as of 2022.[12]