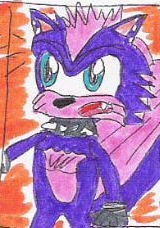 Megagi's reaction to being included in Christian's shitty comic.

Megagi La Skunk is one of Megan Schroeder's furry-inspired characters who dates Bionic the Hedgehog. She has outlived her creator's presence in the comic, similar to Jiggliami, except Megan was (probably) not a troll. Megagi does not have breasts.

Megagi was originally called Spunky Skunk, which Chris obviously didn't like because it might have reminded him of a rather nasty habit.

Given her name and color scheme, she likely constitutes a plagiarism of Tiny Toon Adventures character Fifi La Fume.

Megagi is colored purple, pink and blue. The same colors are used to symbolize bisexual pride.

Worth noting is that Megagi was originally from Parody Island, where she probably lives with Megan's other traced Sonic/Pokémon hybrids, but the name was changed to Parodyse Island in the comic.

Megagi used to have somewhat of a different personality from the other female characters at first; she seemed to be the tomboyish type, and Chris described her as being like an "Army Soldier". In Sonichu #6, she calls Chris out on his shit.[1] Although her concept is still not so original, it was different from the typical Rosechu who just liked shopping. However, in Sonichu #9, she gets watered down just like the rest of them - girly and no personality - and later on in the comic she is further reduced to being Bionic's personal cheerleader.