Magi-Chan is a Sonichu and a member of the Chaotic Combo. He's the serious know-it-all and the only character not interested in finding a sweetheart. He's also one of the major sources of deus ex machina in the comic, and thus far the character most often depicted as just a floating head. He is purple, but has been depicted as crimson in color.

Magi-Chan is was probably the only sympathetic character in the whole series, due to his sarcastic and often serious mood unintentionally making him seem intolerant of Sonichu and Chris's stupid antics, as well as his character's unintentional homosexual undertones. He also remains girlfriend-free the longest of all the characters, and only complains about it when Sonichu boasts that he's going to be fucking his girlfriend all night. Even when Magi-Chan does express interest in a woman, it's a woman with a penis - Silvana Rosechu.

According to Chris, "Magi-Chan" is intended to be a lame pun on "magician".[2] 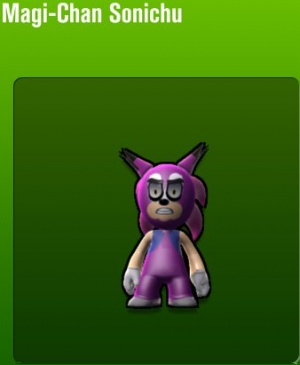 However, Magi-Chan later came in handy as a sort of "right-hand man" to Chris, particularly in his fight against homosexuality. Chris has stated that Magi-Chan monitors all sexual activity in the city using his psychic powers, and later has Magi-Chan travel to the future in order to obtain a bulk batch of the cure for homosexuality - Chris's blood. Magi-Chan would effectively contaminate the water supply of CWCville with Chris's blood in order to cleanse the world of homos.

Magi-Chan's egg lands in a secluded cave in the cliffs surrounding CWCville. Upon hatching, he is spoken to via telepathy by Mewtwo, who trains Magi-Chan Sonee to use his psychic abilities until he evolves during meditation one day.

Magi-Chan stands over CWCville, his all-knowing mind seeing the impending fight against Blake. He sighs, heads on over to the other Chaotic Combo members and seems to set himself up as their leader within moments. Then they all beat up Blake to the point that his head is bleeding all over the grass.

For no reason, Magi-Chan, along with Chris and Sonichu, begin the hunt for the Sonichu Balls at the Manchester High School Gymnasium. Magi-Chan gives some made-up theory about how the Sonichu Balls can be scattered throughout time. He then magically realizes that Chris came in contact with one ball back in 1996 and the three go back in time to retrieve it. On the way back Chris gets lost in the time void and Magi-Chan explains the he will return eventually, instead of actually trying to help him.

Magi-chan pleads with Silvana to stop working with Count Graduon and insists that he can restore her "birth gender."

After his exchange with Silvana, Magi-Chan disappears from episode 20 almost entirely. He plays no significant role in the plot until the epilogue, where he shows up to provide a handy deus ex machina by randomly pulling Chris out of the Time Void.

Outside of the comics