From CWCki
(Redirected from Virgin)
Jump to navigation Jump to search 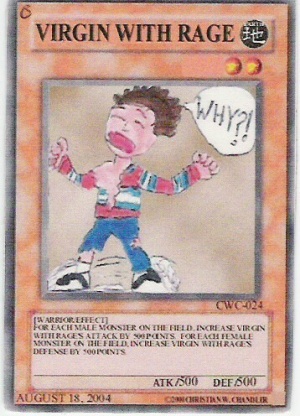 A virgin no more (but with rage all the same)

Roughly a month later, on 1 May, Chris wrote in a Facebook note that his virgin breaker could be found "somewhere on the backpage." Most assumed he was referring to Backpage.com, a website well-known for featuring sex service ads, which would end up shut down by federal law enforcement in 2018.[6] This made it even more apparent that Chris resorted to paying for sex, breaking a vow that he previously set for himself.

In a conversation that was leaked on 25 July 2014, Chris confirmed what everyone already knew; he hired a prostitute to take his virginity. A few months later, a leaked email detailed his experience with her and revealed she went by the alias of Mia Hamm. Given that Chris practically had to bribe someone for his first time, all at the age of thirty, this brings a less-than-ideal conclusion to the virginal chapter of his Love Quest (which, despite his bragging, was never an option he considered with any level of enthusiasm).

Despite his hopes, losing his virginity did not appear to make Chris any happier. His Twitter and Facebook updates in the weeks, months, and years since showed him sliding deeper into depression. An April 2012 post on Twitter stated, "The virgin-breaker was a Great Milestone for me, and it made me feel more self-confident, but still, it was One thing. I still require my Sweetheart. :_( ...<3" In August 2013, Chris even mentioned that he was more stressed, and in August 2014, the Sonic Boom Saga – which saw Chris incensed over a very small change to a video game franchise and would eventually lead to him committing a felony – began.

After the Idea Guys planted their ideas into Chris's mind, however, Chris had found a (relatively) more fulfilling way to conclude his Fuck Quest – by getting into a polyamorous marriage with his imaginary friends Magi-Chan, Cryzel Rosechu, Sylvana, and Mewtwo. For what it's worth, he seemed to be genuinely happier than he did when pursuing real-world tom-tom for his duck to pound, so there's that. Unfortunately, Chris was ultimately not satisfied with this, and eventually got around to having sex with his own mother to satisfy his urges – to predictable results once people found out about who his boyfriend-free girl was.