Count Graduon was the prime mover behind the forces of evil in Sonichu. Count Graduon is an ancient evil spirit residing in the scepter of the evil witch Mary Lee Walsh. Despite being a supernatural being of great power who threatened the ancient Native Americans, Graduon inexplicably holds the title of a middle-ranking nobleman in European society. Despite being envisioned as the overarching director of the campaign against Chris and the driving force of Chris and Sonichu's enemies, the ensemble cast of Electric Hedgehog Pokemon apparently never take the time to learn anything about him, leaving the reader in the dark about his motivations and importance.

Graduon's name (pronounced [ˈɡrædʒ.uː.ən], "GRADGE-oo-un") derives from Christian's feelings about his graduation from high school.[2] Beyond his anger and embarrassment about not receiving special treatment at his class's commencement ceremony, Christian likens his departure from high school to being exiled from comfortable surroundings and cherished friends. He also regards his efforts to adjust to life after school as a great adventure story, so it should perhaps come as no surprise that this man-child's greatest enemy is a metaphor for growing up. 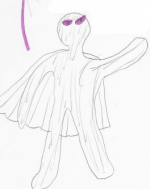 In the original canon, according to the Anchuent Prophecy, Count Graduon is an ancient being of supreme evil sealed away by the leaders of the Cherokee and Wasabi clans. Interestingly enough, despite being trapped for thousands of years, Graduon was able to go to the Moon and teach Silvana, as well as give her a penis.

Count Graduon will have a story revolving around him in Sonichu #16, formerly Sonichu #14 before Chris reordered the comics. From what little has been released, Chris has written a new origin for him. The new canon, according to Sonichu 16, has his new origin being of him born into British nobility on 17 November 1433; taking part in the Hundred Years' War, dying in battle at the hands of a French soldier in 1448. He was then reborn a second time on 17 November 1733, with his memories of his past life still present. He would later take part in the American Revolutionary War, fighting for the Redcoats. After the war, he lived with a family of Jewish wizards, where he learned magic from them in his last ten years of his life. In his third life, he was reborn as Bernard Montgomery; taking parts in both World Wars and eventually dying on 24 March 1976. Count Graduon is currently in his fourth life. 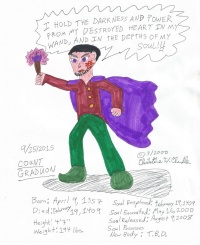