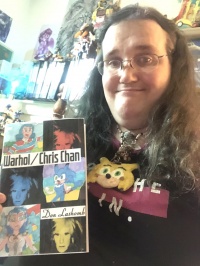 Chris holding his copy with a self-made cover.

Warhol / Chris Chan, subtitled The Lifespan of American Pop Culture, or The Suppression of Reality, is a self-published fan book by Don Lashomb which subjectively compares the output of Chris with renowned modern artist Andy Warhol (who, unlike Chris, supposedly died a virgin). The book was published via Amazon on 19 May 2021.

Chris took an interest upon discovering the book a few days later, getting an ego boost out of being compared to someone famous in extensive detail. However, he still criticized the book over Twitter, taking issue with the book's focus on his sex life and sexually explicit art.[1] He purchased a copy of it and made his own cover for it as he didn't "have to feel bored in with looking at a pickle." Said pickle is a reference to the Warhol-designed cover art for the Velvet Underground's debut album The Velvet Underground and Nico. Upon browsing the book's Disclaimer chapter, Chris commented about a nitpick with its contents, insisting that his delusions were real. Aside from it, he mentioned liking the book so far and thanked the author, giving it a glowing five-star review.[2]

On 27 May, Chris recorded a cover of “I’ll Be Your Mirror” by the Velvet Underground and Nico to promote the book.

On 1 June 2021, while reading chapter 5 of the book, Chris briefly roleplayed as his younger pre-name change self over Twitter, in order to check in with his inner child and search for issues to address.[3]

In a 13 July 2021 tweet, Chris stated that he would distribute approximately 24 book jackets that he had made for the book while at the Everfree Northwest My Little Pony convention to those who showed that they had purchased a copy. He would also state that he would be willing to autograph any copy of the book that was brought to him.[4]

On 1 August 2021, in the wake of Chris's admission of incest with his mother, Lashomb made a public statement distancing himself from Chris and announcing that he would stop promoting the book.[5] According to the incest fallout chat leaks, Chris gave Lashomb subtle hints about his incestuous relationship in early July, but Lashomb (like Null) apparently did not put the pieces together.

Despite Lashomb cutting ties with Chris, the book was briefly promoted again on Praetor's Etsy page with Chris's permission.

Warhol and Chris Chan: Both became famous while producing artwork that was often met with derision. Both became the focus of intense interest and curiosity. Their indelible personalities provoked fascination and laughter. In spite of their strangeness--or because of it--they reflect particularly pertinent aspects of the world around them. They are thought of as the oddest of oddities, and yet they represent the course of our society as a whole.

From bright Pop Art to sordid underground films, Andy Warhol portrayed an America that was both familiar and avant-garde. He carried a tape recorder everywhere and prophesized that in the future everyone would be famous just for being themselves. Several decades later, Chris Chan embodies Warhol's dream: Thanks to the internet Chris has become known worldwide, is constantly documented, observed, scrutinized, and made the subject of mass debate and media analysis.

Warhol worked to legitimize popular culture and give it the prestige of high art. But more recent generations have grown up breathing pop culture as if it were air. "Young at heart", people continue playing video games and collecting toys into adulthood, and favorite entertainment franchises are treated akin to religions. More than anyone else, Chris Chan emblematizes the excesses of this era.

This comprehensive study investigates the parallels and divergences between Warhol and Chris Chan, both of whom can be seen as bellwethers of cultural shifts. The two are compared in terms of how they relate to the following elements--from the fundamentals of life to the themes of our age:

● Fame: Mythologies of Self & Multiverse

A wide spectrum of knowledge is painstakingly drawn upon to analyze our two subjects from all angles. References and points of comparison are made to elements of:

● Philosophy (from Plato to the postmodern)

Through pathos and ridiculousness, in an uncertain world that's constantly changing, we trace the human spirit as it passes from the golden age of Americana... through the high Warholian era... and now into Chris Chan's Poké Ball.

(NOTE: Chris Chan's pronouns are indeed respected throughout this study. The author is proud to have earned the approval of Christine Chandler herself.)" 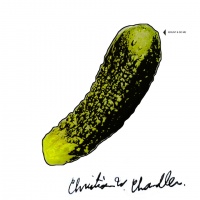 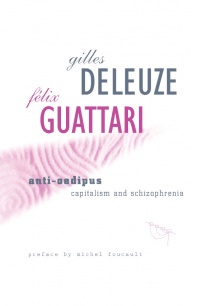 The image linked in Lashomb's message.