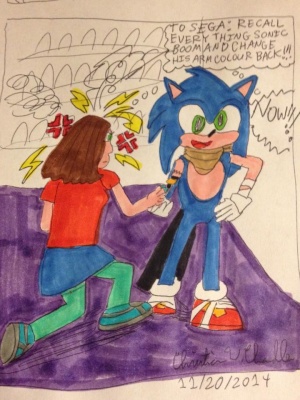 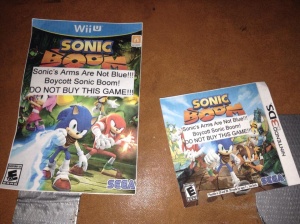 Towards late 2014, while everyone else was posting on Facebook about less important political concerns, Chris decided that the most important cause of the time was protesting Sega's decision to make Sonic's arms blue (as opposed to the usual tan color) in their latest non-canon game in the series. He is so passionate about this supposed defamation of his favorite video game character that he has gone so far as to write incoherent, rambling letters to Sega, throw tantrums about it on Facebook, threaten the lives of Sega employees, glitterbomb Sega's American HQ, and even physically assault retail staff. His angry, incoherent letters to Sega clearly show that Chris's prolonged estrangement from reality is at its peak, and that concepts such as civility, moderation and channeling anger in any way that doesn't involve ranting like a child throwing a tantrum are by now completely alien concepts to Chris, or at least go out the window whenever he's annoyed. Unfortunately, unlike previous bouts of anger where Chris would film himself or take to social media to rage at his target, in this instance, he decided to take a hands-on approach to it by vandalizing copies of Sonic Boom wherever he sees them. When GameStop employees rightfully tried to make him leave the store, he agreed to walk out, but only after brandishing his can of mace and spraying it at one poor employee's shirt. 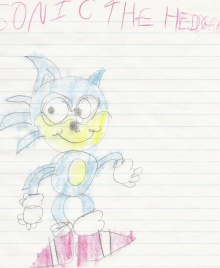 While it is difficult to decipher Chris’s garbled sentences, it is clear that his fury is linked to his belief that Sonic, like all cartoon characters, is real and lives in a parallel universe. Like many autistic people, Chris is very resistant to change, especially when it is forced upon him. Chris would not change (“commit suicide”) even in the face of tremendous hardship. Sonic, however, like the King of Pop, was forced to change for trivial reasons such as appealing to a broader audience. Sonic has been Chris’s lifelong hero with whom he identifies strongly, so he has taken this injustice very personally. Unfortunately, he falsely assumes that countless millions feel the same way. 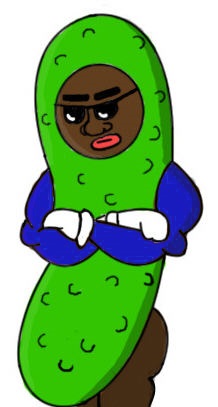 On 11 December 2014, CWCki user FromtheWordsofBR jokingly sent an e-mail to Sega Customer Service under Chris's email, suggesting that they send him free copies of Sonic Boom for the HEXbox. Chris discovered this the next day, and proceeded to rage.[1]

On 26 December, Chris broke several laws by entering a GameStop from which he had been banned, vandalizing a Sonic Boom display, and macing an employee who was calling security as Chris left the store. All of this was recorded by a presumably bewildered bystander, and was uploaded to Tumblr the next day. Within two days of his attack, Chris was incarcerated in Albemarle Regional Jail, then released on a $2,500 bail, with a hearing scheduled for early 2015. 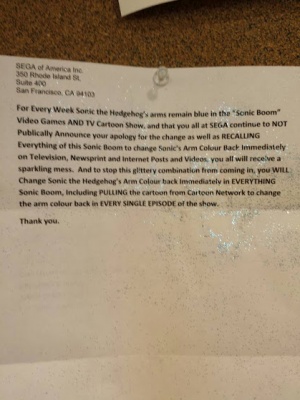 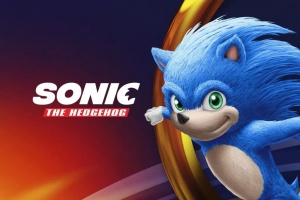 On 4 March 2019, leaks of Sonic's design for the upcoming movie revealed several drastic changes from the original. One of them was the inclusion of the blue arms. That very same day, Chris retorted, showing that his 2014 viewpoint was anything but changed: