The Multidimensional White Knights (MWK) are a group of accounts created by Twitter user "NoahIsSmelly". They were created as a means of further deluding Chris into his beliefs of fiction existing in alternate universes, and to gain his trust for further weening in the vein of the Idea Guys. Noah joined Twitter in February 2019 to cash in on the then-current meme of parody accounts for various fictional characters, primarily from Diary of A Wimpy Kid and The Amazing World of Gumball. When the meme lost popularity, he turned his attention to Chris, who was in the midst of the Soft Exile at the time. Though Chris accepted his follow request, Noah's fangirling fell on deaf ears, as he was being drowned out by Chris feeling sorry for himself and Sockness' fapping. His luck changed in June 2019, as Chris abruptly and unceremoniously opened his Twitter back to public viewing. Chris liked two of Noah's tweets, which helped embolden his weening/white knighting efforts. It was also around this time he created a series of sockpuppets known as "The Knights of C-197".

The first MWK account went under the name "CarrieKrueger17", which assumed the role of Carrie Kruger, a ghost character from the Cartoon Network series The Amazing World of Gumball. Most of the tweets that "Carrie" posted remained ignored, but Chris did like some, even commenting on a video he made to "channel Chris' psychic power." [1]

The second incarnation of Carrie. This account was created by Noah in 2016 presumably to cash in on the then-relevant Nutshack meme, with Tito Dick being one of the more recognizable characters from the show. Noah renovated this into a new Carrie to replace the apparently now-blocked CarrieKrueger17. 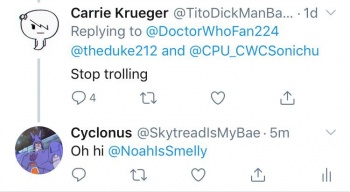 The other miscellaneous knights are a smorgasbord of random characters matching Chris' seemingly random views in regards to the Dimensional Merge and C-197 as laid out in his insane ramblings. No two accounts are from the same show, though all come from content oriented towards children. All of the accounts aim to convince Chris that they live in C-197, are protecting him or that they support, and believe in his messages. Noah has created as of now 5 sockpuppets with the goal of attempting to convince Chris that they all worship him in an attempt to gain his trust and to reaffirm that he is a "CPU Goddess" by playing characters and commenting on his and others' twitter posts, though most of these sockpuppets remain in disuse. You tell me who the autistic person is here. A current list is below: 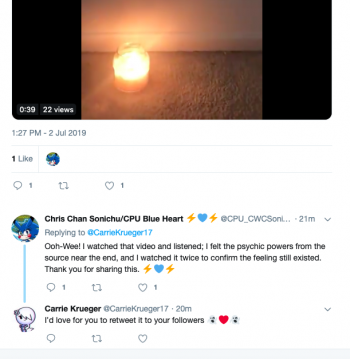 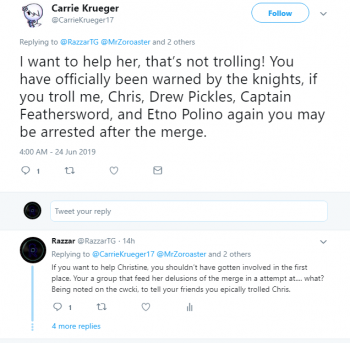