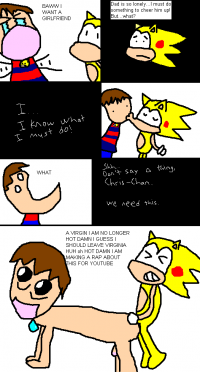 One of Evan's first pieces of Sonichu art.

Evan Christopher George is a troll and the original creator of Simonchu.

Rewind to 2007: Sonichu was found on the Cartoons image board at 4chan. It soon made its way over to the Video Games board. On 3 November, a "fanart" (read: dickgirls) thread for Sonichu was made at /v/ and someone suggested that someone there should do the honors of sending him the e-mails. Thinking it to be a good idea at the time, Evan collected the best images from the thread and a pornographic MS Paint comic he drew (pornographic MS Paint comics being his disgusting yet hilarious specialty to this very day) and sent it to Chris's AOL e-mail account.

The reply he got shocked a nation.

The line "masturbating and squirtin'" was the first sign of Chris's more perverse side, and most hilarious of all was the angry drawing of Chris and Sonichu made for his response (an image ripped out of Sub-Episode 3[1]), with the words "We're Keeping Track." The Encyclopedia Dramatica page was initially made solely to house the responses Evan had been getting and the fanart he had been sending. Eventually Chris threatened to create Evan in Soul Calibur III and beat him up, much like he had Mary Lee Walsh, and Evan sent him a drawing of himself just so he could create such a video. However, he never replied and largely forgot these e-mails even happened.

After the emails, Evan remained a part of the Sonichu scene for some time. After initially drawing up fan art in MS Paint of the Ghostbusters car from the preview of Sonichu #8, the image was actually used in the comic when it was officially released. Evan was oddly credited by his Encyclopedia Dramatica account name, implying that Chris got the image from ED. However, if he had any sense, he would've realized the same account was used to post those HATEFUL and SLANDEROUS e-mails that ruined his life. 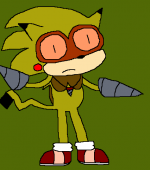 Ironically, in spite of directly confessing multiple times that he was responsible for the Encyclopedia Dramatica articles due to the e-mails he had sent, Chris still blames Jason Kendrick Howell to this day.

Eventually he thought it'd be funny to try and get a fan character into Sonichu, creating "Simonchu" due to his at-the-time addiction to Gurren Lagann. This totally backfired on him as Chris turned it into mass debate material, making Simonchu into the character Simonla Rosechu.

Effort to remove Simonla from Sonichu

For some time, Evan attempted to have Simonla Rosechu removed from the comics, stating anger at Simonla being given a china (which is sort of ironic considering that he gave Rosechu a pickle, but Chris isn't clever enough to make that point). Christian decided he would include Simonchu in Sonichu #9 after reading these e-mails, which would have lead to TWO shitty recolors running around instead of one less as intended--if Chris had actually included Simonchu. 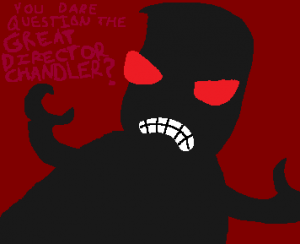 Another image from the Simonchu comics.

In a Mailbag Chris mentioned to a fan that Evan allowed him to edit Simonchu into Simonla.[2] Soon after, Evan sent an e-mail to Chris on the CWCipedia, calling BS on that claim, only to be ignored.[3] Evan sent a second e-mail, demanding that, as his character, Simonla be killed off on-screen. Evan got a response, blankly informing him that Simonla was essentially Chris's character now, since he decided she would date Wild Sonichu.[4]

Evan persisted in his actions to remove Simonla from the comic, his e-mails to the Mailbag either being answered bluntly or being entirely ignored. Chris insisted on what he called "The Brother/Sister Plan", stating he would put Simonchu into the comics as Simonla's brother. However, Evan protested this, not wanting TWO bastardizations of his character running around. The situation culminated in an e-mail originally sent to enlighten Chris on the use of IP addresses. As a sidenote, Evan asked Chris to remove Simonla once more; Chris promptly retorted with a long-winded and completely bizarre statement:

Ironically, earlier that day Chris uploaded an image to CWCipedia encouraging support for aid to the 2010 Haiti earthquake disaster, depicting Simonchu and Simonla working together to build a table. The construction of this table was so monumental that the two placed a plaque in front of it stating "Rebuilt by the Brother/Sister Team of Simonla and Simonchu".

Unwilling to let him continue to use Simonchu as well as his "sister", Evan sent Chris another email, warning him that it would be his last chance to remove both characters from the Haiti image and the comics. Chris states that, despite all her relatively obvious similarities to Simonchu, that Simonla is a "SEPARATE, INDIVIDUAL CHARACTER", and that Evan should stop stressing out about it. Chris also claims that, although the character is based on Simonchu, the fact that he could have come up with her on his own basically amounts to her being an original character. Later, Chris would attempt to call a "retraction" and erase all evidence of Simonla ever being inspired by Simonchu, hoping that this would provide an easy escape to the problem. Of course, it didn't.

On 6 February 2010, Chris revealed that he was finally doing away with Simonla and removing her entry from the CWCipedia. However, this didn't please Evan, especially when Chris said he'd do it "later". In response, his lawyers had the CWCipedia slapped with a cease and desist notice to fully remove the character, forcing the Sysop to close the CWCipedia to edits. This resulted in Evan destroying the undestroyable.

On 14 February 2010, Evan released two pages from Sonichu #10 which he had received from Chris. The first page is essentially a written form of his apology videos to Alec and Evan, whilst the second page involves Simonla finally being killed, by way of an exploding toilet. While this conformed to Alec's wishes, Chris as usual refuses to admit total defeat, and implies Wild is out for "revenge."

Evan used to work on Simonchu, a comic series describing the adventures of Simonchu as Evan intended. It was hosted on the Asperpedia, due to Evan entrusting the rights of Simonchu to Alec Benson Leary. Whether Chris's mysterious G.D.C. powers have taken their effect on Evan's free will remains to be seen.

After Chris finally killed off Simonla, Evan put the Simonchu comic on hold. Evan's stance on the possibility of more Simonchu comics is so far unknown.

Evan appeared in Sonichu #10: attempting to drop something on Simonla to kill her, he's stopped by Magi-Chan before he can. However, Alec Benson Leary ends up doing so, planting an exploding Voltorb in the toilet and killing Simonla. Evan is imprisoned along with Alec, Sean and Mao (Sean and Mao having done nothing to them) and given a biased show trial that predictably gets them sentenced to death. Evan is tortured to death (having his hands and feet amputated and his duck mutilated) by Wild and his new child, Sandy Rosechu. And since Evan is, according the rules of the CWC-verse, Sandy's grandfather, a whole new layer of disturbing is added to the whole thing.

In the revised ending, Evan is instead exiled to the Amish community, where, without Internet access, he can no longer troll.

In May 2014, Chris revealed that his retcon was for the Asperpedia Four to have failed in the attempt to murder Simonla, and to have been incarcerated at an off-shore CWCville maximum-security prison facility.[5] Being as this essentially violates the tenets of Chris's original agreement with Evan, for several years it remained to be seen whether or not the reclusive creator of Simonchu would emerge from the darkness to reap vengeance once more. After Simonla's revival in Sonichu 11, the answer became a firm and decisive "No." Evan was most likely momentarily amused and then immediately stopped caring, since the joke was long over by that point. Plus, the good gesture of Chris retconning his death in the comic probably satisfied him enough to stop caring.