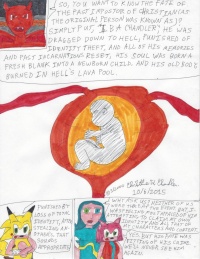 Ben Saint is a webcomic artist, troll and self-proclaimed 'Dimensional Prophet of C-197 and Hierophant to NLACakaNM'.[4] Though he had been interested in Chris for years, lecturing for two hours on Sonichu in 2016[5] and 2020[6] and commissioning art detailing Liquid Chris's fate in the comic world,[7] he is most known for exploiting Chris and his Internet infamy in order to boost views of his own comic and solicit thousands of dollars in donations in October 2019.[8] He would provoke him by inserting Night Star, Chris's My Little Pony fan character, into his comics and role-playing with him to get him invested in the comic's plot.[1][9] Unlike Alec Benson Leary before him, Ben Saint's heavy-handed approach to parody had failed to gain Laughs Under Lucricities and acclaim from onlookers. In time, he gave up inciting Chris and gained his approval, and their interactions became unremarkable by the end of November 2019.

Chris tries to roleplay with Endless War, a Discord bot, which kills his character. Chris retcons the loss in his version of Ben's comic.

Ben began working on a comic, which mostly serves to promote the Discord server/game Endless War, which he runs. In the comic, Night Star banishes two My Little Pony characters, Strawberry Milk and Phantom Horn, to NLACakaNM, the land of the game. The latter character is a clear parody of Christorians, so obviously that even Chris notices it. Chris took a near immediate interest in the comics, as early as 16 September. Ben and Chris presumably opened correspondence soon after. As the narrative continued, however, Chris became more displeased with the directions it took. Meanwhile Chris also tried to play Endless War, a game managed by a bot on Ben's Discord server, but was killed and became frustrated. Seeing an opportunity, Saint devoted himself to more deliberate attacks against Chris, creating a section on his Discord server for that specific purpose.[11]

This came to a head on 1 October 2019, when Chris began releasing Sonichu Special 7, his own drawings depicting what he wanted to happen in Ben's comic lore. Chris, role-playing as Magi-Chan, then sent Ben a DM both announcing/commanding that Ben make the comic as Chris willed, as well as demanding Ben provide Chris with $300.[12] Later, Chris would also return to the server and announce that he had revived himself with his goddess powers and that the bot's game was over, as Chris's comic canon had deemed it so. Unlike Sonichu #15, where the fancomic author in question approved of Chris using her work, Ben is much more resistant to Chris influencing the work, creating two concurrent and battling canons. In response to this, Ben accused Chris of committing genocide in his revisions, depicting his own characters being injured and killed by Chris's cleansing rains. Chris initially denied the charges, affirming that Ben's characters would just become normal humans.[13] Seeking to contrive an incident, Saint stated on Discord that CWCville had declared war on his own fictional city, giving a death toll of about 70,000.[14] Chris would thus concede that there had been casualties, yet that 99% of the population of Arizona (where this fictional city was placed) had survived.[15] He would regard this loss of fictional life trivial.[16] A week later, Chris would justify his overriding Ben's description of his own fictional universe by his superior psychic powers and ability to see into alternate dimensions.[17]

An annoyed Chris tells Ben to stop harping on the genocide, perturbed to the point he slipped up in his role-playing and ended the message writing as Magi-Chan instead of himself.

Attempts to provoke Chris fell into repetitive, stereotypical social patterns in mid-October 2019, soon after they began, and would remain so for the rest of the affair. Saint would keep drawing his characters massacred by the soda rain and beg Chris to stop, while Chris would assert that he already had,[18] and that any deaths already inflicted were for the greater good. Variety was occasionally introduced as Chris sometimes accidentally wrote his replies as Magi-Chan.[19] When Saint depicted his dead characters on a special story arc in hell,[20] or otherwise diverged his plot, Chris would demand Saint return to drawing his comic instead of pursuing his role-playing.[21]

Like clockwork, white knights and other enablers came in to defend Chris's actions and inject their own strain of nonsense into the mix, nominally to help Chris along. Jacob Sockness offered on 17 October to summon Jakoba, a war god of his own invention, to demand even more reparations from Saint, yet Chris refused, instead accepting the Multidimensional White Knights' enlisting Ed Bighead, who was supposed to have became the king of Babylon in C-197 and was rallying an army to defend Chris from the slime.[22] Ben eventually relented, at least in part: he revived, to Chris's approval, his characters that he had killed off earlier that month, using the same !revive command from his Discord server that Chris had used to declare himself resurrected.[23]

Further interactions with Ben, on Twitter as well as Discord, long continued to dispute whether or not Chris had committed fictional genocide. Accusations of hatred were common on both sides.[8] Ben would try to manipulate Chris's version of events by stating his fictional city was rained upon several time, while Chris would resist such changes to his version of events being inserted. Saint's publicity stunt was however stunted by Chris's shifting interests, as he devoted more attention to his trading card line and Jacob Sockness returned for a second round of weening after a fortnight's delay. On 19 October, Chris asserted that he had divine mandate from the CPU goddesses to supersede Ben's decisions about his comic.[24]

Even when exciting him, Saint would sometimes endorse Chris's delusional beliefs: he would notably respond with fiery protests whenever somebody else refused to use Chris's tomgirl pronouns.[4]. By November 2019, interactions between Ben Saint and Chris became rarer, yet the atmosphere between them was friendlier than before.[25] Shifting his attention from Sonichu 14 to making playing cards instead, Chris casually dashed Saint's hope to be included in the Sonichu canon beside such illustrious figures as Ted Bundy before him. On 10 November 2019, their rivalry had come to an official end as Chris accepted an invitation to appear on Ben's live stream, where he was interviewed for over an hour. Genocide accusations faded away as Saint continued, with Chris's approval, to use Night Star and Chris Chan Sonichu in his comics beside his other characters. Saint would also keep out of the confused web surrounding Jacob Sockness, MKRNightVee and others who sought positions of power over Chris about the same time. After several months of benign quiet, Ben Saint returned on 29 January 2020, rallying support to hold a convention in Virginia at a yet undisclosed time; Chris enthusiastically sanctioned this fundraiser.[26] Two months later, on 24 March 2020, Chris began supporting Saint on Patreon:[27] he pays five dollars monthly, which is not enough to access all of his new comics.[28]