From CWCki
(Redirected from CHRIS CHAN DRIP OUT)
Jump to: navigation, search

In recent years, Chris and/or Barb have occasionally been visited by fans at their house. 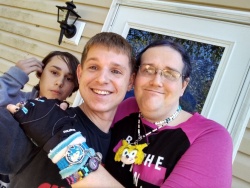 Chris with Joey (far left) and his brother.

On 18 October 2019, Joey Vance and his older brother visited Sonichu Headquarters to meet Chris. Their accounts were posted on Reddit in r/ChrisChanSonichu the next day.[1]

The two brothers were initially visiting Charlottesville and since Ruckersville just happens to be in their way, Joey decided to make the most of their time together to personally visit Chris. The overall visit was described as a calm experience between the two parties, with the older brother (known by his Reddit handle xv5qx) even giving a Sonic toy as a "peace offering". One interesting note Joey mentioned is the fact that Chris smells of weed. Whether the musk is the result of his usual poor hygiene or his new drug habit is still up for debate.

[A dog is heard whining eerily throughout the video]

Joey's Brother: We live in the area- sorry to bother you- we've been fans for a few years and stuff and...

Joey's Brother: though we'd kinda give some gifts

Joey's Brother: Yeah. Its nice to meet you dude.

Chris: Yeah. It's nice to meet you both.

Joey's Brother: Yeah. Anyway, how have you been?

Chris: Ahh been doing very well, you knowsshh having to cope with the events-

Joey's Brother: Yeah, I- I heard about the- the situation with the guy, I'm sorry to hear about that.

Chris: Well don't worry about that, it's all cool.

Joey's Brother: We're all looking out for your best interests, and you definitely have our support so-

Joey's Brother: Oh, appreciate it. I you- blue and green eyes, they're really cool.

Joey's Brother: That's awesome! Yeah. So, anyway, um is it cool if we get a selfie or something? 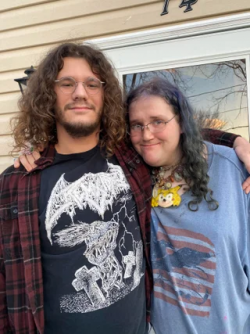 On 20 February 2021, a Ruckersville local by the handle of Aggravating_Art_2982, along with his older brother and his brother's girlfriend visited Chris and documented his experience on Reddit's r/ChrisChanSonichu subreddit.[2]

On 28 June 2021, an anonymous user on 4chan's /pol/ board visited 14 Branchlord Court to take pictures of the house and the Dodge Caravan. The user played the flute near Patti's old doghouse and apparently saw Chris peeking through a window in the house.

On 29 August 2021, during the fallout of the incest incident and the August 2021 arrest, a Kiwi Farms user called Phillip_Jeffries visited 14 Branchlord Court with a friend in order to see the condition of the aforementioned Dodge Caravan and the cats. Phillip was able to confirm that the vehicle was back at the house, and that at least two cats, Baby and Sylvia, were still living at the residence. Most notably, it was also confirmed that Barbara had returned to the house and that the Caravan had been registered with replacement license plates.[3]

On 20 September 2021, a pair of weens checked up on Barb to ask about Chris, unknowingly recording the audio of the meeting. Barb was previously described as looking frail, more "gone" than usual, and growing facial hair.[4] Barb seemed to be confused when asked about where her son was while Clover howled at the door. Given that Barb did not know that she was being recorded, this serves as evidence that she is not faking having cognitive difficulties as some claimed she did in Chris's begging videos, or at least that her alleged difficulty hearing is getting worse.

The video was then posted to the r/ChrisChanSonichu subreddit,[5] but the original video was taken down before being mirrored.

[dog whimpering throughout the video]

Barbara: I do not understand.

Woman: My- My friend Chris, I was just wondering if Chris was here.