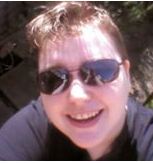 Aly Michelle Hirschberg (born 15 August 1987),[10] also known by her transgender byname Alan Christopher, is a mentally disturbed[11][12] Scottish Jew living in England who emerged in mid-2019 and believes herself to be Chris's best friend.[13] She is one of Chris's financial benefactors, and has even claimed to be his primary donor responsible for mitigating the Financhu Crisis,[14] though Chris has denied this.[15] She has also set up abortive fundraisers to send Chris (and, for a time, Jacob Sockness) on a world tour,[16] which Chris repurposed to support his My Little Pony obsession.[17]

Hirschberg and Chris have known each other since the Classic era: as early as 2008, they would exchange letters which contents have not yet been divulged.[18] She has also spent several thousand dollars on his Etsy and eBay offerings before these ventures were shut down. She is apparently truly convinced that the Dimensional Merge and CWCville are real, and that Jacob Sockness's sorcery is really effective. Other than as a tool to solicit funds on Twitter in October 2019, she has had no substantial interactions with Chris in public.

Miss Cherry, birth name Daniel Stone,[19] is an Australian tomgirl who spent fifteen hundred dollars of his mother's money in a failed bid at becoming Chris's first sweetheart in the Idea Guys' wake. On 20 July 2018, he pledged $589 to Chris's Patreon, as a means of getting Chris's attention by being the first to hit his monthly goal and referring to himself as his number one fan and his newest sweetheart.[20] However, Chris simply took the money and disputed his claim of being in a relationship with him, partially doxing him as well:

In response, Stone doubled down by increasing the pledge amount to $1,000.[21] On 23 July, Chris posted to Twitter about the good fortune of getting the money, as he needed it to fund his car repairs as his Plan A for getting to BronyCon. In doing so, he doxed Stone fully.[22] That Chris appeared annoyed at Miss Cherry claiming to be in a relationship with him is interesting, considering that he has done the same thing to many women in the past. Stone discontinued his pledge on the next day;[23] however, as Chris had set his Patreon to upfront charging in September 2017,[24] the money remained with Chris. Miss Cherry faded into obscurity, broke and broken-hearted. 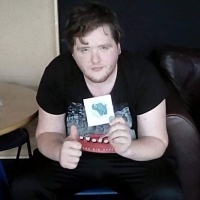 James Lewis Martin (born 11 May 1985), also known as William Robinson or CPU Byzantium Heart,[26] is an autistic Chinese Polish Englishman, halal lolcow and Hirschberg's friend, also giving Chris money and affirmation over his fantasy world by pretending to be a fellow CPU god.[27] Robinson believes he should give Chris money to keep him from going homeless and to fund his other expenses, ignoring the fact that Chris receives a monthly tugboat which covers those bills and that Chris spends the money Robinson and Hirschberg give him on frivolities such as printing up TSSSF cards and buying magic stones. Robinson also tried to send his aunt, a social worker, to Chris's house to give him even more help[28], however Chris refused to answer the door, thinking the social worker was there to have him committed to a mental institution.[29] 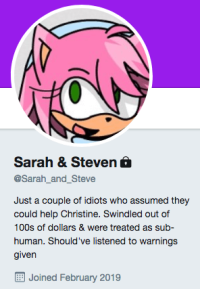 Sarah and Steven were a pair of half-hearted enablers, working jointly, who first appeared in February 2019 when they discussed a Rosechu medallion with Chris, as well as the possibility of meeting him in person, on Twitter.[30] They had bought a Nintendo Switch for Chris and supported him on Patreon, yet their attempts to keep themselves anonymous and out of public view were derailed by Chris himself when he filmed himself with the new console and revealed their secret plans to move to Virginia and isolate Chris from other contacts to make him dependent upon them. After this, they disappeared for a month, setting a trend that would mark a pattern in all future cycles of interactions with Chris.

In May 2019, Sarah and Steven returned, professing themselves as believers in Chris's personality cult,[31] and again sought to malign him against the Guard Dogs by presenting themselves as exclusively trustworthy.[32] After several of their private discussions were leaked onto Kiwi Farms,[33] they abandoned course again and lamented that they were swindled out of the money they had freely given Chris in their bid for influence over him; their relationship with Chris further deteriorated,[34] and he finally cast them aside on 25 July 2019, when they raised the question of what would happen should they dare question any of Chris's teachings or beliefs.[35] Further attempts to reach Chris by endorsing Jacob Sockness, in both August and October 2019,[36][37] have to date all ended in failure.