Chris sings "Lovin' You" by Minnie Ripperton for Ivy and shows that he has clearly lost his fucking mind.

In a new video, Chris goes completely plonkers at Clyde Cash. He shouts his lungs out, and threatens to call the police. [1]

Christian posts the Tour of Christian's House on Youtube.

He also posts a new video where he threatens anyone who fucks with him.

Chris posts a music video for Ivy, with remarkable departures from his previous videos, such as video edits, unified song in the background, and more. Furthermore, the images shown in the comic, featuring Clyde Cash as a villain, may be from Sonichu 9.

Chris posts a mysterious video which is deleted within minutes. Based on this Krapple Komputer Kompany thread, this is a maverick troll who is the first not to be associated with PVCC. The video is related posted by Chris here.

The Pickle Man tricks Chris and steals his date. [2]

Christian posts two new videos, apologizing to Emily and the people at the Game Place.

Chris calls out for Miss Emily and Stephanie, presumably two hopeful new sweethearts which may cause Chris to bring his love quest back on the Internet.

Some argue that it's a trap designed to get those two trolls v& by Chris's parents.

Chris uploads a new video in which he reads passages from Leviticus that support his case against homos. He also announces that he has ceased using the internet to further his Love Quest and will instead be courting women in real life using knowledge gained from John Tesh and a book written by a nine-year-old boy. He then questions the nine-year-old's assertion that men have to do all the work in approaching girls--effectively proving that Chris has less game than a third grader. [4]

Christian uploads two new videos giving his side of the story in the audio released on March 3. He announces that he isn't planning to wear his medallion anymore (because he destroyed it and stuck the pieces in his ass) and that he is still the rightful mayor of CWCville despite verbally ceding power to Billy Mays. He also claims that BlueSpike is responsible for sonichuandrosechu.com going down and implores his fans to help him get the site back. [5] [6] Apparently still not realising YouTube is forever, within 24 hours Chris deleted the video where he explained how BlueSpike made him shove the medallion up his arse.

Meanwhile, audio has surfaced in which Christian endures humiliations from Max to protect his PlayStation Network account and to gain an opportunity to visit Julie, only to learn that Julie and Max are both imaginary characters concocted by trolls. 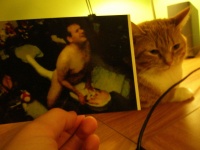 It is rumored that Chris' parents have confiscated his webcam/PSEye and microphone after an anonymous troll sent his father several postcards in an envelope that contained screencaps of Chris' CWC-ikigate sex tape.