From CWCki
(Redirected from FaceBook)
Jump to navigation Jump to search 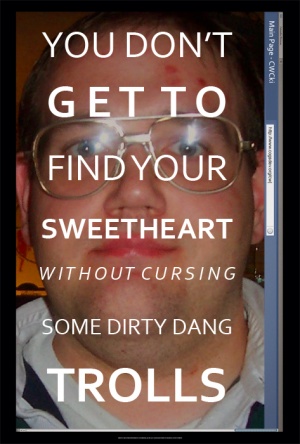 The CWC Network, coming to a theater near you! 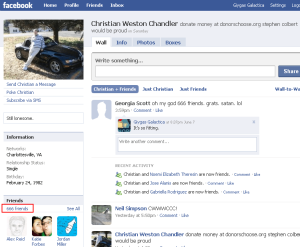 His friends list has hit the number of the Beast.

Facebook is a social media platform with over 2 billion registered users, one of whom is Chris. During his Love Quest, Chris used it, along with MySpace, as his main means of communication.

Chris probably created his first Facebook account in January 2008. It was reportedly hacked on 17 September of that year. On 31 May 2009, it was hacked again, revealing notes and messages to boyfriend-free girls in the area in hopes of them becoming his sweetheart. He failed horribly of course, and the Miscreants showed us how hard. While often overlooked, his correspondence with these e-women reveals that even on the Internet, he manages to convey that he is a fat autistic.

Events in 2010 turned Chris firmly against the website. He blamed it in part for his breakup with the Wallflower, and in November had some harsh words and gestures for it while announcing his departure from the Internet. Sometime in mid 2011, his Facebook account was removed from the site. On 5 July 2011, a new Facebook was discovered with a new picture of Chris, but two days later, his profile was deactivated.

On 2 January 2012, Chris re-opened his Facebook account. Between 2012 and 2018, it was his main social media platform, using it to leave occasional open notes for trolls; talking to his gal-pals, most frequently Anna, Kim and William; and whoring his eBay merchandise. He also has an album dedicated to screenshots of the Kiwi Farms, proving that he still feels the need to obsessively check what other people are saying about him on a regular basis.

This is presumably what his profile looked like at the time it was hacked in May 2009. While some text is missing, it appears to be similar to his MySpace account at that time. Trolls also discovered a series of messages and statuses associated with this account. 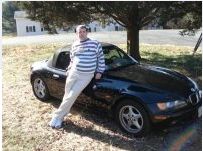 Not a quote, but an astrological fact. I was born under the Sign of PISCES, the sign of the PROVIDER.

I am fully capable of providing the necessities, and then some, for the Lucky Woman who loves me for me, and becomes my True Sweetheart.

I am young at heart, because I enjoy the seemingly child-like things I do like playing with Sonic the Hedgehog, Yu-Gi-Oh, Pokemon, Legos, My Little Pony, and drawing cartoonishly. I am also creator of my Electric-Hedgehog Pokemon, Sonichu. I have been drawing and writing comic books, and I've drawn/written quite a few issues so far. I have graduated from Manchester High School on the Honor Roll, and I have graduated from PVCC with two Computer Aided Drafting & Design Degrees, May 2006. I am shy, but I would really enjoy the company of a pretty girl who likes some of the things I do, with a few opposite traits (excluding smokers and drunks). I also like to have fun when I can, and I don't like to be alone. I would prefer Person-to-person encounters/chats instead of over the internet, but please feel free to send me a message or comments.

Not to brag, but I took two separate HTML classes, and then learned more around the net. I highly reccomend learning HTML. Although HTML word processors and Generators spells out the details of a page in a nutshell, it really helps to know the language so you can jazz it up more your way later (in the Notepad or in the Profile/Group Editor). Learning to Know is Past Cool!

I SO Need a Cute Girl to make into a Sweetheart-Soulmate from the ground-up, because I DO NOT WANT TO BE ALONE AND SAD in the Long-Run.

Also, did you know that male/female couples live longer than a single person; I heard it on the John Tesh Radio Show.

And I HAVE A DREAM... I dream that I will become a Good Father for my future, daughter, who I will lovingly name *Crystal*, alongside my Future Sweetheart/Soulmate (my future wife/her mother). :)

I would feel better when a woman who is interested in me is [text omitted]. I have not had the best of luck with my search for a Sweetheart-Soulmate in my past. There was a lot of lying and backstabbing done to me, and I'm looking for someone who is honest, caring and will love me for who I am.

Member of: One Body of Christ Experiment (all Christians on Facebook), Adult Swim We Love/Hate, I Love Lucy...the daughter of the devil, Before I liked girls, I liked the Pink Power Ranger!, Amy Jo Johnson Fan Club, Sonic The Hedgehog, Fans of Monica Rial

Chris's suffering at the hands of the trolls has, over the past several years, taught him to be more cautious about sharing personal information. In particular, he no longer sees much point in using Facebook as an attraction sign, and he is more circumspect about selling himself to strangers. Hence, his current profile (as of Oct, 2017) is pared down compared to the original.

(IGNORE ALL GOOGLE RESULTS) [This line was eventually deleted.]

I like making those close to me emotionally happy. :)

Added during the Tomgirl saga.

It's been complicated since September 7, 2017

Pronoun: She added during Tomgirl saga

In April 2015, Chris added: "Some serious; delightful to know and talk about."

I was banned from an English Class, because I overreacted and misunderstood an assignment, and the Male Professor had a beef against Autistic People. Mary Lee Walsh, "Dean of Student Services", overreacted and interfered with my early Sweetheart Search days. She made it obvious that True Love was Illegal in the state of Virginia, or at least Charlottesville, VA. She banned me from PVCC to seek psychiatry and anger management before resuming to get my CADD Degree. Years later, after I apologized for making her out to be a witch, Mary Lee Walsh Permanently banned me from Piedmont Virginia Community College What a crazy bitch.

This paragraph was later removed.

Chris provides no information about his favorite movies, TV shows, music, or games. Over time he has reviewed a few institutions as the mood strikes him. He is a member of four public groups: FIX SONIC'S ARMS IMMEDIATELY, SEGA!!!, the Manchester High Sports Page, "Events at Impulse Gay Social Club," and "Children's Autism Hope Project."

Chris has "follow" enabled, meaning that anyone can follow his account without sending him a friend request. However, only his friends can send him comments. The majority of reactions he receives are "Haha" and "Angry", which are used similarly to a "thumbs down" on YouTube.

Photos Commented on by Chris

Photos commented on by Chris not uploaded by himself. Found through Facebook's graph search feature. 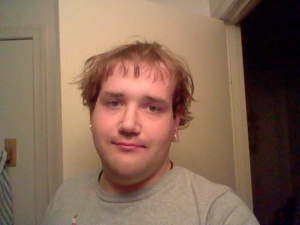 On 8 May, 2012, activity on Chris's Facebook page read that he recently installed the Facebook app for the iPhone, which suggests that he purchased an iPhone or iPod touch. The resolution of some of his more recent photos also fuels this suggestion.[2]

The "CyanIndigo" screenshot in Chris's post-arraignment message sports a status bar with the "nTelos" name on top. Given that nTelos is a regional cell phone carrier in the Charlottesville, VA area, this all but confirms that Chris has indeed wasted even more taxpayer money on expensive luxuries he does not need. Sure enough, on Sunday 19th May, 2013, he confirmed that he not only had a 4th Gen iPod Touch, but a 5th Gen iPhone as well. While one would assume that he bought the 5th Gen as a replacement (never mind that he could have just replaced the screen as far less of a cost), he confirms that he broke the 4th Gen one shortly before an article published on the day before (which was, conincidentally or not, about broken screens). According to him, one is for entertainment, and the other is for taking calls, "business" and going on the Internet. This, combined with the fact that he designed a duct-tape case to hold both devices, points to Chris needlessly owning the two of them for the sake of having the latest technology.

On 26 May 2013, Chris threw a temper tantrum on Facebook, and he quickly revealed the reason why: somebody on his Friends List had screencapped all of his Facebook status updates (including the ones that were hidden) and uploaded them on Imgur. The screenshots not only revealed a lot of what Chris was going through between 2011 and 2013 (as well as a deluge of posts complaining about how lonely he was) but also revealed a very dark side about Chris as well - several photos revealed that he wanted several people dead, and one post in particular demanded that somebody kill Mimms' girlfriend.

The biggest irony of it all is that the one who exposed all of this previously unknown (and very unsavory) information was Chris himself.

On 2 July 2015, Chris's Facebook account was set to private. While the reasons for the disruption are unknown, it can likely be chalked up to Chris bending the rules of the website as per usual. His infractions have included sexually explicit artwork, screenshots of sexting, death threats to Sega employees, and linking to a Wikipedia article about tribadism with a sexual image as a thumbnail. Later on the next day, Chris's account was put back online. Chris was briefly suspended again in 2016, for making multiple death threats against Donald Trump.

In the early morning hours of 7 April 2018, most of Chris’s Facebook suddenly went private once again: Chris is still on Facebook (as of 25 July 2020), but Twitter has since become Chris’s first choice for social media.