From CWCki
(Redirected from Ryan)
Jump to: navigation, search 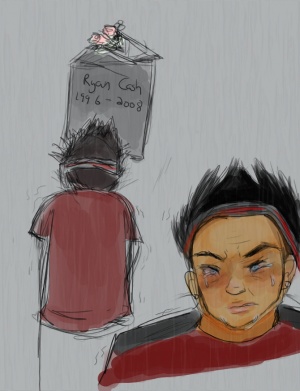 Ryan Cash (11 September 1996 - December 2008) was a devoted Sonichu fan who committed suicide when Chris announced there would be no comics released in protest of the Encyclopedia Dramatica page. He was the little brother of later Miscreant leader Clyde Cash, and a cousin of Vivian Gee. Following his death, his older brother Clyde launched a mission to avenge his death, a mission that teeters between unwavering justice and obsessive vengeance.

Chris was first notified of the death of Ryan in a December 18th IRC chat. His reaction at the time was to comment that it was "sad" and that he would make a video acknowledging the tragedy, as well as considering making him a memorial in some form. He also advertised his Sonichu Home Club.

Ryan was mentioned again in another IRC chat on the 22nd of December. Vivian sent Chris a message from the family, saying that they hoped he wasn't too affected by it. Chris said that he had an emotional moment for a while, but that he'd already got over it. When asked if he had a message for the family, Chris answered; "Try to move on and live life as peacefully as possible; I'm sure Ryan would have wanted his family to be happy as much as possible. I know that God and Jesus would have told them the same thing from the bible."

A full week and a half after he first promised it, Chris finally got around to acknowledging the death in a video in CWC Update 28 December 2008, where in he briefly mentioned Ryan in between thanking his fans for helping him win the GameStop Be A Star Sweepstakes and advertising his Sonichu Home Club more.

Sonichu #8 was also dedicated to Ryan.

Note that Chris only did the video at all because he was reminded to do so by PandaHalo earlier that day in another IRC chat.

In yet another IRC chat in January 2009, Vivian read out Ryan's above quoted suicide note to Chris. Chris merely said that he had already offered his sympathies to the family, and left the chat.

When Clyde later threatened revenge on Chris for killing his brother and his lack of remorse about it, Chris responded with the video Chris's Plea to Clyde Cash, in which he told Clyde to find a girlfriend and get over it.

In a surprising moment of intelligence, Chris told Kacey that he didn't think the Ryan suicide story was true.[1]

Unsurprisingly, Clyde didn't take kindly to Chris's insensitive speech, and he embarked on a spree of revenge for several months. For a start, he posed as a Nintendo employee named Gregg Mays and hacked Chris's website Sonichu.net and bought it down, along with its successor site, Sonichu.info. He also impersonated Shigeru Miyamoto as well, thwarting attempts at creating a Sonichu video game in the Miyamoto Saga, and he raped and impregnated Chris's sweetheart PandaHalo as well, eventually also marrying her and raising their child. Successor trolls like BlueSpike, Jack Thaddeus and the Man in the Pickle Suit all continued Clyde's work afterwards, while Clyde himself seemingly retired from master trolling, feeling Ryan to be adequately avenged.